If you want to get an H-1B visa, you should get your visa certified in March via Indian outsourcing companies that are located in New York City, hire programmer analysts, pay out a base salary above $75,000. Or at least, that’s what an analysis of data from h1bdata.info suggests.

In the wake of president-elect Donald Trump’s election campaign, where illegal immigration was at the center, voices to abolish the H-1B visa and speculations about the extent of the H-1B visa reform are going strong, not only in the United States, but also in India. With 15 days left to the inauguration of Donald Trump as the 45th President of the United States, it’s a good time to take a look at the H-1B visas that have been certified over the last years.

The first finding is that the top 15 companies that have been granted visas, are mostly outsourcing companies. Especially the ones that are based in India, such as InfoSys, Tata Consultancy Services and Wipro hold the large share: 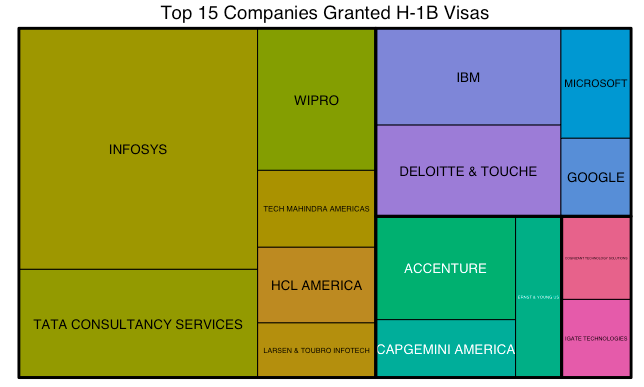 This is very much in line with other sources, that suggest that outsourcing companies will be the first to undergo tougher vetting if an H-1B reform passes. These companies are clearly the so-called ‘low-hanging fruit’: they make the most out of the current H-1B policy. Nevertheless, also if any reform would be put in place, there would still be an effect on the other 6 companies that are based in the United States.

But, rather than being a matter of outsourcing versus other firms, this top 15 of companies that have certified H-1B workers indicates that the tech industry would be affected: these are the names of information technology or technology companies.

Putting aside the impact on the industry, the data also shows that the more populated the state, the more job opportunities that need an H-1B visa: most applicants are located are California, New Jersey, New York and Texas. Cities that stand out in the analysis are New York, Houston, Atlanta, Chicago and San José. The job opportunities that are most certified in these states are the programmer analysts. Next in line are the software engineers, computer programmers, systems analysts and software developers with H-1B visas.

There is the question whether or not the H-1B is a cheap labor program. The data shows that, in fact, the H1B applications that were denied, have a lower salary. Also, salaries above $75,000 have a better chance of getting certified. At first sight, this doesn't necessarily seem to hold for the jobs that have been mentioned above: 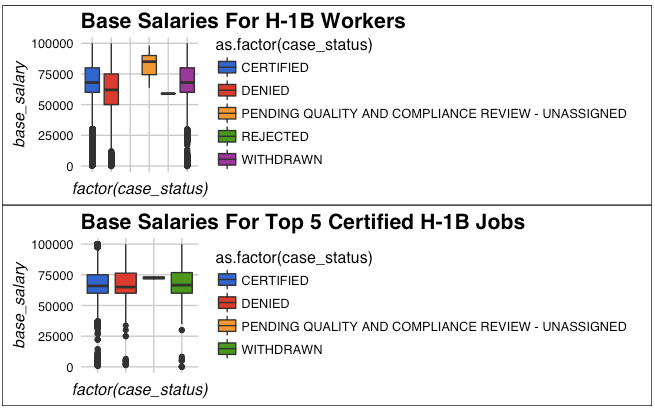 It’s clear that the base salaries above \$75,000 not valid for most H-1B workers: the median is somewhat above \$60,000. Comparing these salaries to the ones that can be found on sites such as PayScale, this doesn't give an initial impression of being a cheap program. This is something to work out in further analyses.

The h1bdata.info data also indicates that March stands out as a peak for getting H1B applications certified. This means that most people have applied for a visa by January. But, in general, applicants don’t have to worry about your H-1B applications getting certified: only 5,13% of all applications that our data set captured doesn’t. This percentage seems quite high, and maybe it is, considering the fact that this visa is for workers in specialty occupations (as the above has already demonstrated), and the requirements. This is definitely something that will be reconsidered, as the Protect and Grow American Jobs Act seems to demonstrate with the proposal to eliminate the Master's degree exemption.

The following map summarizes the findings that were described above. It shows the certified visas for the top five H-1B jobs. The different colors indicate the starting year of the visas, the circles indicate the base salary:

Studying the data to help your H-1B application might help, but only to a certain extent. For now, we only know this: we’re not sure how Trump and his administration are going to crack down on the H-1B visas, but the above already gives a good idea: outsourcing companies are probably the first to be tackled by a reform in the H-1B program and, on a higher level, the tech industry in more populated states are the first ones to feel the effects. Also, the requirements for the candidates will likely become stricter.

Do You Want to See All This Yourself?

Go ahead and analyze the data for yourself! DataCamp instructor Ted Kwartler will guide you through it with a series of R tutorials!

If you are hunting for your first data analyst job or looking to move up in your career, use this guide to help prepare for your interview, practice some data analyst interview questions, and land your dream job.

In this article, we discuss what predictive analytics is, explore some examples of how it is used, and look at how it works.