Regression methods are used in different industries to understand which variables impact a given topic of interest.

For instance, Economists can use them to analyze the relationship between consumer spending and Gross Domestic Product (GDP) growth. Public health officials might want to understand the costs of individuals based on their historical information. In both cases, the focus is not on predicting individual scenarios but on getting an overview of the overall relationship.

In this article, we will start by providing a general understanding of regressions. Then, we will explain what makes simple and multiple linear regressions different before diving into the technical implementations and providing tools to help you understand and interpret the regression results.

What is Multiple Linear Regression?

A simple linear regression aims to model the relationship between the magnitude of a single independent variable X and a dependent variable Y by trying to estimate exactly how much Y will change when X changes by a certain amount.

The “linear” aspect of linear regression is that we are trying to predict Y from X using the following “linear” equation.

So, what about multiple linear regression?

This is the use of linear regression with multiple variables, and the equation is:

We might not always get a straight line for a multiple regression case. However, we can control the shape of the line by fitting a more appropriate model.

These are some of the key elements computed by multiple linear regression to find the best fit line for each predictor.

An important aspect when building a multiple linear regression model is to make sure that the following key assumptions are met.

In the next sections, we will cover some of these assumptions.

A Step-By-Step Guide to Multiple Linear Regression in R

In this section, we will dive into the technical implementation of a multiple linear regression model using the R programming language.

What do we mean by customer value? Basically, it determines how worth a product or service is to a customer, and we can calculate it as follows:

Customer Value = Benefit — Cost. Where Benefit and Cost are, respectively, the benefit and cost of a product or a service.

This value is higher if the company can offer consumers higher benefits and lower costs, or ideally, a combination of both.

This analysis could help the business identify the most promising targeting opportunity or next best action based on the value of a given customer.

Let’s have a quick overview of the data set so we can apply the relevant preprocessing before fitting the model.

First 6 rows of the data (Animation by Author)

From the previous results, we can observe that the data set has 3150 observations and 14 columns.

However, based on the problem statement, we will not need the churn column because we are now dealing with a regression problem.

With this newly formatted data, we can fit it into the multiple regression framework using the lm() function in R as follows:

Let’s understand what we just did here.

You can learn more from our Intermediate Regression in R course.

An alternative to using R is the Intermediate Regression with statsmodels in Python. Both help you learn linear and logistic regression with multiple explanatory variables.

What Does the Multiple Linear Regression Model Tell Us?

Now that we have built the model, the next step is to check the assumptions and interpret the results. For simplicity, we will not cover all the aspects.

Distribution of the model residuals

This can be shown in R using the hist() function. 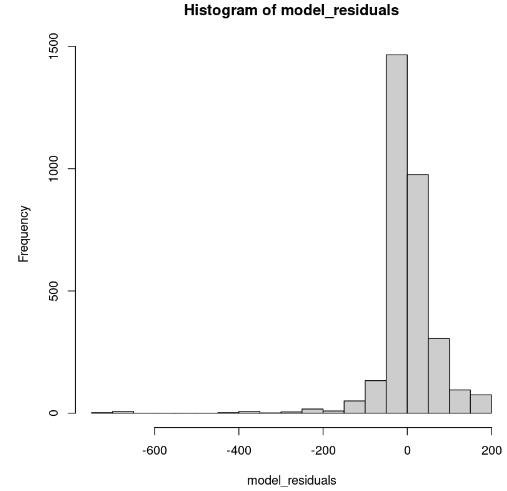 The histogram looks skewed to the left; hence we can not conclude the normality with enough confidence. Instead of the histogram, let’s look at the residuals along the normal Q-Q plot. If there is normality, then the values should follow a straight line. 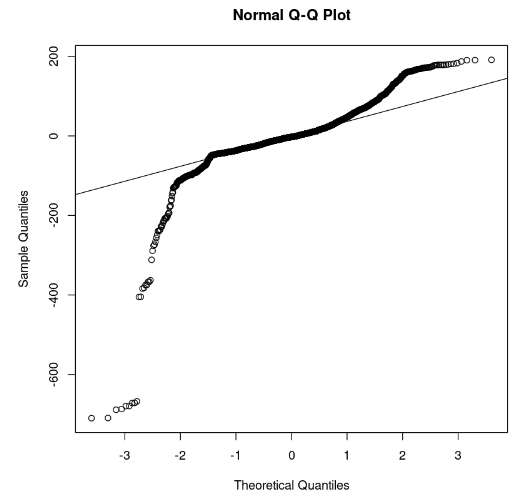 From the plot, we can observe that a few portions of the residuals lie in a straight line. Then we can assume that the residuals of the model do not follow a normal distribution.

This is done through the following R code. But we have to remove the Customer_Value column beforehand. 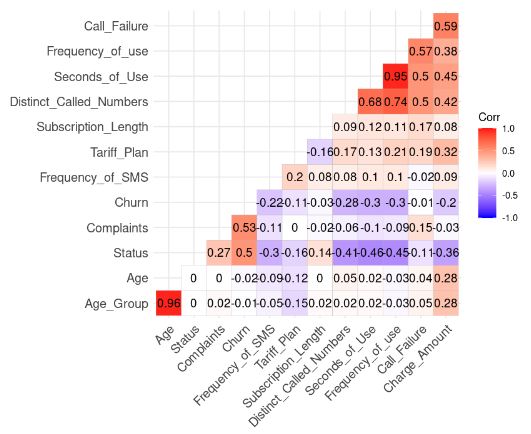 Correlation result from the data (Image by Author)

We can notice two strong correlations because their value is higher than 0.8.

In this case, we can get rid of the Age_Group and Second_of_Use in the dataset.

Let’s try to build a second model without those two variables. 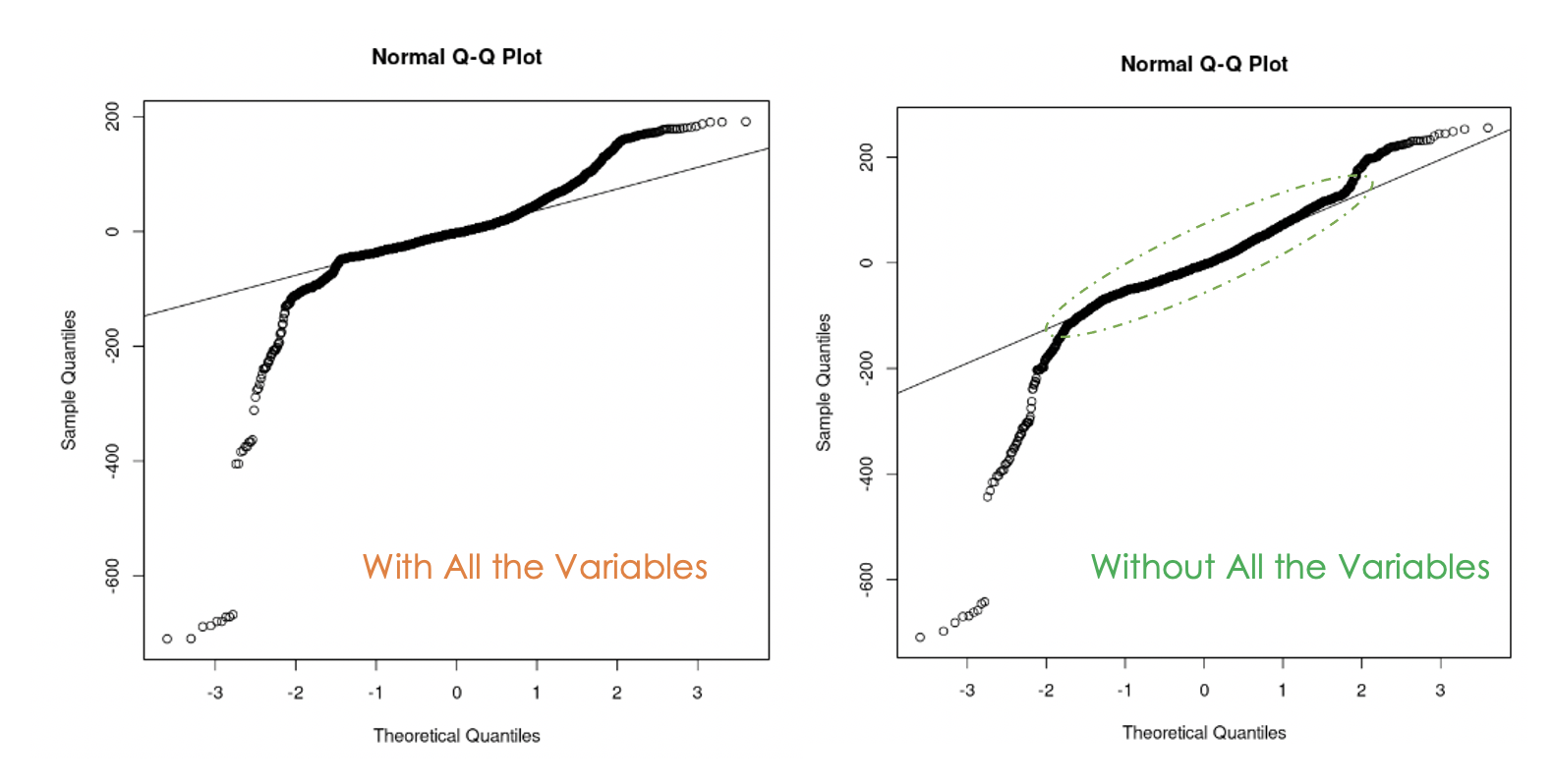 We can notice that getting rid of the multicollinearity in the data was helpful because, with the second model, more residual values are on the straight line compared to the first model.

How to Know Which of the Two Models is Better?

One way of answering this question is to run an analysis of variance (ANOVA) test of the two models. It tests the null hypothesis (H0), where the variables that we removed previously have no significance, against the alternative hypothesis (H1) that those variables are significant.

If the new model is an improvement of the original model, then we fail to reject H0. If that is not the case, it means that those variables were significant; hence we reject H0.

From the ANOVA result, we observe that the p-value (8.0893e-316) is very small (less than 0.05), so we reject the null hypothesis, meaning that the second model is not an improvement of the first one.

Another way of looking at the important variables in the model is through a significance test.

A variable will be significant if its p-value is less than 0.05. This result can be generated by the summary() function. In addition to providing that information about the model it also renders the adjusted R-square, which evaluates the performance of models against each other. 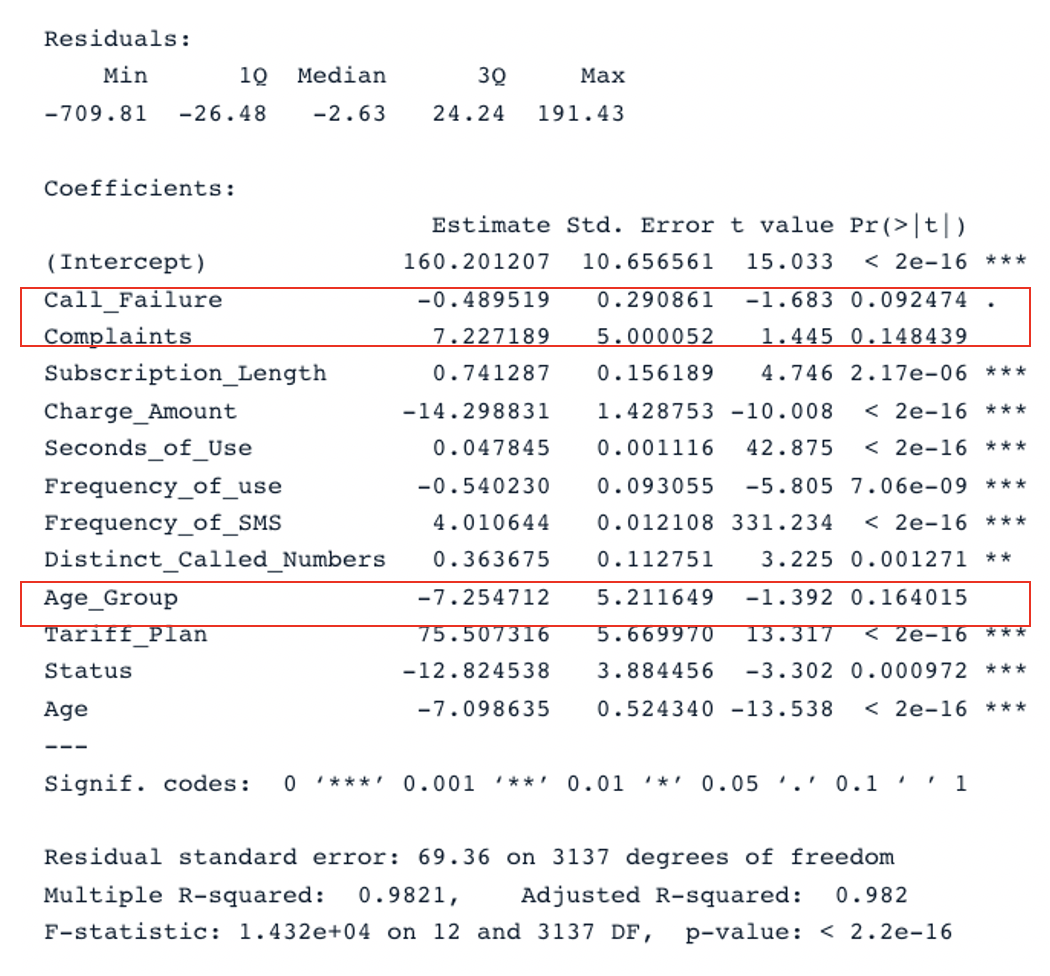 We have two key sections in the table: Residuals and Coefficients. The Q-Q plots give the same information as the Residuals section. In the Coefficients section, Call_Failure, Complaints, and Age_Group are not considered to be significant by the model because their p-value is higher than 0.05. Keeping them does not provide any additional value to the model.

Applying the same analysis to the second model, we get this result: 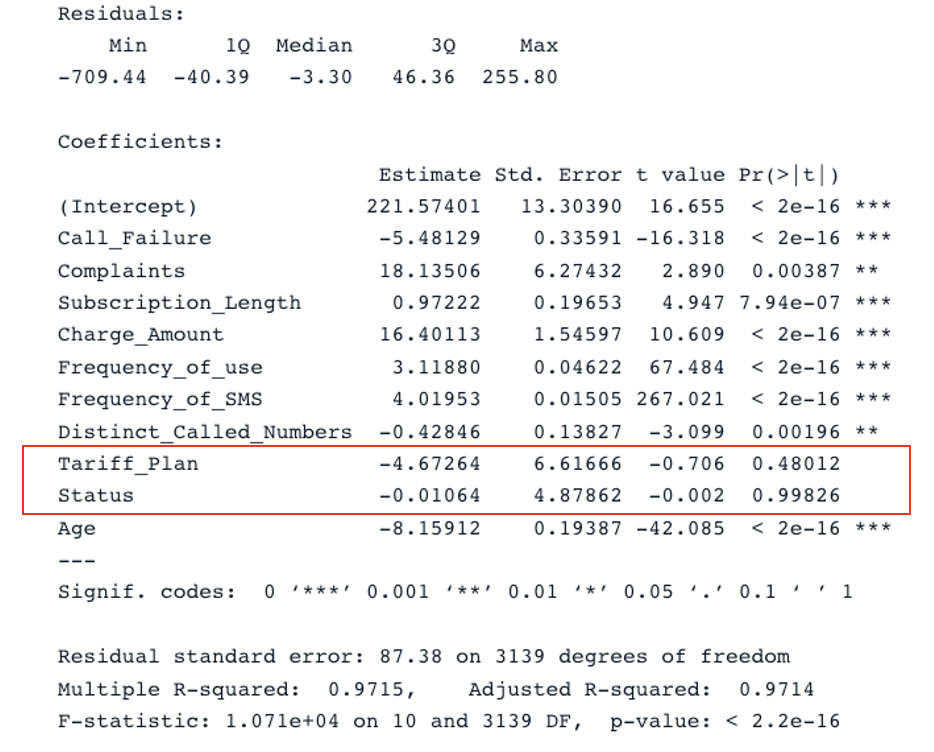 The logical next step of this analysis is to remove the non-significant variables and fit the model to see if the performance improves.

Another strategy for efficiently choosing relevant predictors is through the Akaike Information Criteria (AIC).

It starts with all the features, then gradually drops the worst predictors one at a time until it finds the best model. The smaller the AIC score, the better the model. This can be done using the stepAIC() function.

This tutorial has covered the main aspects of multiple linear regressions and explored some strategies to build robust models.

We hope this tutorial provides you with the relevant skills to get actionable insights from your data. You can try to improve these models by applying different approaches using the source code available from our workspace.

What kind of problems can be solved by multiple linear regression?

There are three major areas of problems that the multiple linear regression analysis solves  — (1) causal analysis, (2) forecasting an effect, and (3) trend forecasting.

What is the advantage of multiple linear regression?

It may lead to a more accurate and precise understanding of the association of each individual predictor with the dependent variable.

Because it requires at least two predictor variables.

Inference for Linear Regression in R

Intermediate Regression with statsmodels in Python

Compare the main elements of Julia vs R programming languages that set them apart from one another and explore the current job market for each of these skills.

Welcome to our cheat sheet for working with text data in R! This resource is designed for R users who need a quick reference guide for common tasks related to cleaning, processing, and analyzing text data. The cheat sheet includes a list of useful functions and packages for these tasks and examples of how to use them.