What is a Git Merge Conflict?

Git version control system is all about working as a team and contributing to projects. Developers usually work on isolated branches, and when they are finished, they merge the changes with the main branch. This type of teamwork is highly productive and effective in finding bugs. Sometimes multiple developers are working on the same line of code, and when they try to merge the changes, conflicts arise.

The diagram above gives the perfect example of how a typical Git merge conflict occurs. The main branch has a file containing the text “HELLO, WORLD!”. The username abid forks the main branch, and changes the text to “HELLO, CAT!”. While abid is making changes, the original main branch is also being modified to “HELLO, DOG!”. Merging these branches will prompt a merge conflict issue and halt the process.

The `git merge` command's primary job is to combine two branches and automatically resolve the conflicts. However, from time to time conflicts surface where two people have changed the same line of code or removed critical files that another developer was working on. Git will mark these changes and stop the merging process. In this case, the conflict has not been automatically resolved; rather the developer has to make changes manually or use tools to resolve the conflict.

By default, Git merge uses fast-forward to integrate missing commits into the target branch. For example, it is used to update the local branch from a remote server using the pull command. Fast-forward does not raise merge conflict issues as Git will not apply it if the head of the target branch is missing in the source branch.

There are two types of Git merge conflicts: at the start and during the merging process - Atlassian. In this section, we will learn about both types and the ways to resolve each scenario.

At the Start of the Merge

Git merge will fail at the start if there are changes in the working directory or staging area. It fails at the start to prevent the changes from being overwritten by incoming merge commits. This happens due to conflicts with local changes, not with other branches or developers. To stabilize the local state, you can use commands such as `git stash`, `git commit`, `git checkout`, or `git reset`.

A failure during the merge means that there is a conflict between the source and target branch where multiple developers have modified the same file. If the automatic merge fails, Git will ask you to resolve issues manually. You can also use third-party tools to assist you in visualizing and integrating the changes.

In this section, we will learn about various native commands to visualize and resolve the Git merge conflicts.

Git status is the most frequently used command to display the status of modified files, staging area, and commits. During the merging process, it is used to identify conflicted files.

The Git log with --merge arguments produces the list of commits that are in conflict with the source branch.

By default, the `git diff` option will show you the difference between uncommitted changes and previous commits. Git diff is used for comparing branches, commits, and files. It is useful for preventing future merge conflicts.

Commands for Merge Fails at the Start

The checkout is used for undoing changes or switching to a new or old branch.

The Git reset is for reverting the changes in the working directory and staging area.

Commands for Conflicts During the Merge

The --abort argument will stop the merge process and revert the changes to their original state before the merge started.

Git reset is usually used during the merging process to revert the conflicted files to their original state.

Git conflict will occur if you have deleted the file in the current branch, and someone else has modified it in another branch. In this case, you can either add a file and commit,

or you can remove the file and commit.

Merge tools are user-friendly visual tools for identifying and resolving all types of merge conflicts. Some of the tools support additional capabilities such as comparing changes, Git operations, and project and repository management. There are two types of Git merge tools: terminal-only and GUI-based. The terminal-based tools open within PowerShell or Bash, and the GUI-based tools open in a windowed environment.

To check the list of installed and valid tools, use:

The list consists of all valid tools that can be installed and integrated with git commands.

For example, we have vim and nvim installed by defaults, and if you want to see the difference between an uncommitted file and a previous commit, type:

The vimdiff3 tool highlights the changes and lets you compare commits within the terminal.

Difference Between Two Versions of Same File in Vimdiff3

Meld is a free and open-source tool that takes resolving merge conflicts to another level. To integrate it with Git, you need to first download, and install the setup from the official site. Next, add it to the global configuration so that by default, Git will launch Meld for resolving conflicts.

The config commands below are only applicable to Windows users. The only change you have to make is to change the path of the Meld installed file for Mac or Linux.

After setting up defaults, you can type `git difftool` within the Git local directory to launch the Windows version of Meld, or you can `git mergetool` to resolve merge conflicts as shown below. 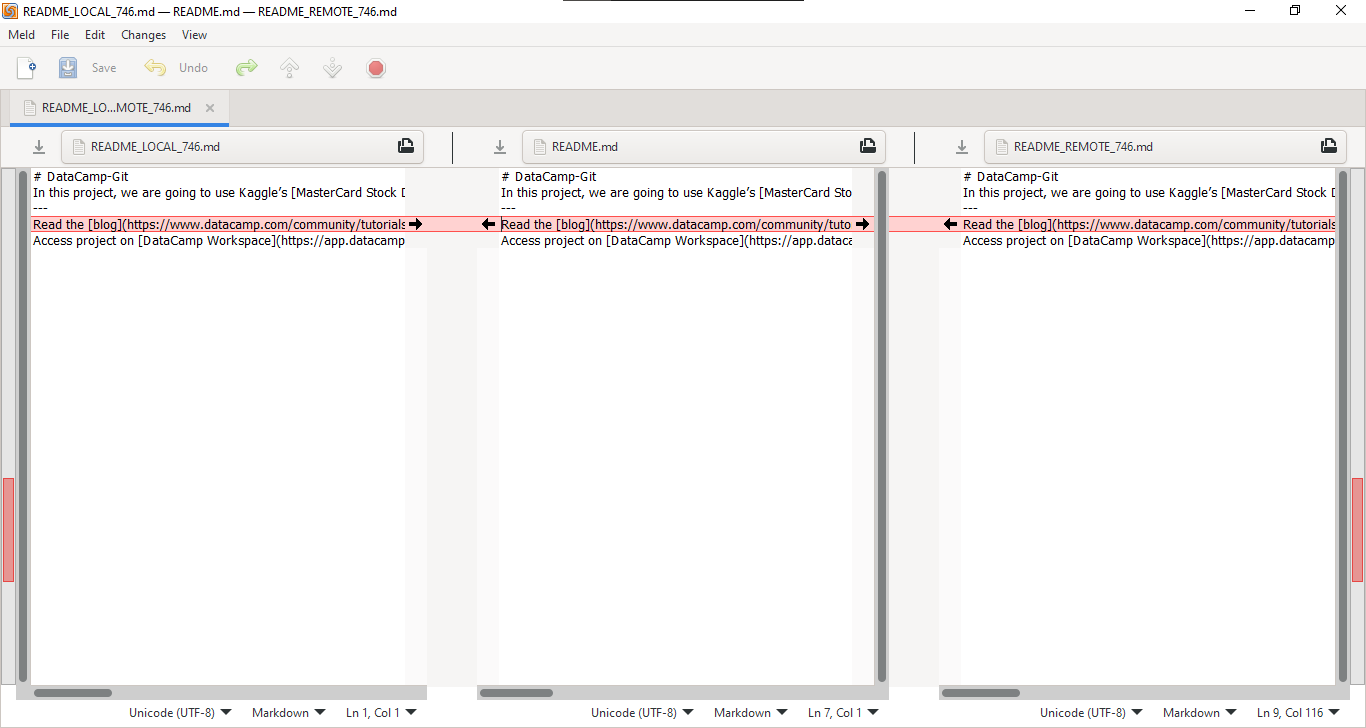 Resolving a Merge Conflict with Meld

VSCode provides the best and most popular way for resolving the merge conflict. When Git fails to merge files automatically, the VSCode will highlight the conflicted code and give you four options: accept current changes, accept incoming changes, accept both changes, and compare changes. You can use these options to clean up your file and resolve all pending issues.

If you are looking for a complete solution for your Git operations, try GitKraken. It comes with a free client, VSCode extension, and provides a built-in tool for resolving merge conflicts.

How to Resolve a Git Merge Conflict

In this section, we are going to learn how to create a Git merge conflict and then resolve it. The tutorial is divided into two parts. In the first part, we will learn to resolve Git conflicts locally; the second part is about resolving conflicts with a remote server (GitHub).

Creating merge conflicts will help us learn how these issues arise in the first place. We can then use creative ways to resolve these problems or even prevent them from happening in the future.

We will now create a Git repository with a single file and create our first commit to get started.

Next, we will create a new branch readme and change the title from “..Git Merge..” to “..Git..”. Add the file and create the commit using -am argument.

Go back to the main branch and add a new line to the README.md file using >>. By saving the changes and creating commits, we have successfully formed a conflict between two versions of the same file.

As we can see, while merging the readme branch, Git has prompted a message saying that the automatic merge has failed, and we have to make changes manually and then commit the result.

We will resolve the issue manually by opening and editing the file in the Notepad. The image below shows the arrow with HEAD, a divider, and a different direction arrow with a readme. The HEAD part shows the existing changes in the main branch, and the readme part is the branch that we want to merge, which consists of a different heading. 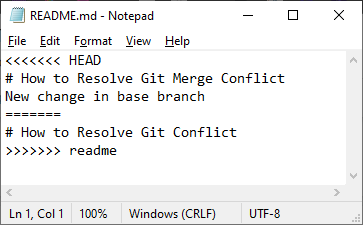 To resolve the problem, we will remove the readme branch part, arrows, and divider. The final version of the file should look clean, as shown below. 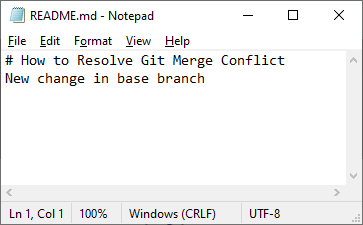 After we add the file and create a commit, the merge conflict will be resolved. It is the most common and simplest way of resolving issues. You can also use an integrated development environment (IDE) to resolve issues faster.

For creating and resolving remote merge conflicts, we need to create a new repository on GitHub. 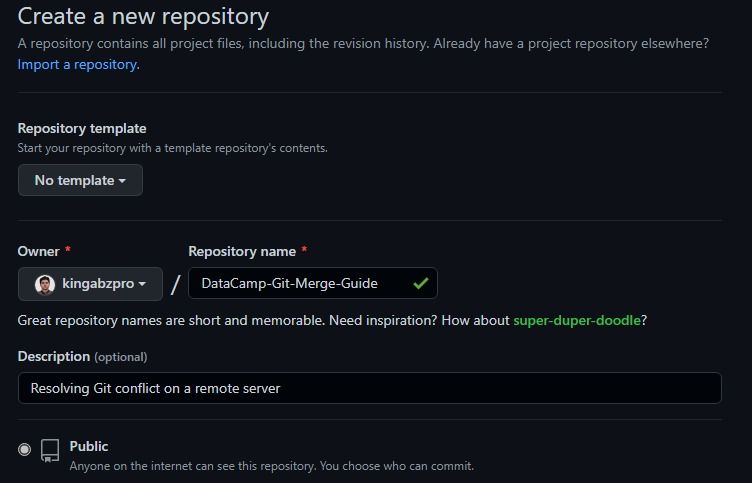 Creating a New Repository on GitHub

Next, add remote name (origin) with address to the repository and push all the changes from a local repository to the remote main branch using upstream.

To create a conflict, we need to make changes in the remote and local README.md file. You can use the GitHub file editor to change “..Git merge..” to “..Sit-Merge..” and then commit the changes.

Then, in the local repository, change the README.md file to only add a simple title and commit the changes.

Finally, push the changes to the remote server. Notice that Git has raised the error with hints on how to eliminate the issue.

We will follow the simplest hint, which is to pull the file from the remote server before pushing.

Pull the file failed due to a merge conflict in the README.md file. We could fix it manually using Notepad, but this time we will use a visual tool to assist us in this process.

Merge tool Meld will identify conflicted files and show them in the Meld GUI application. 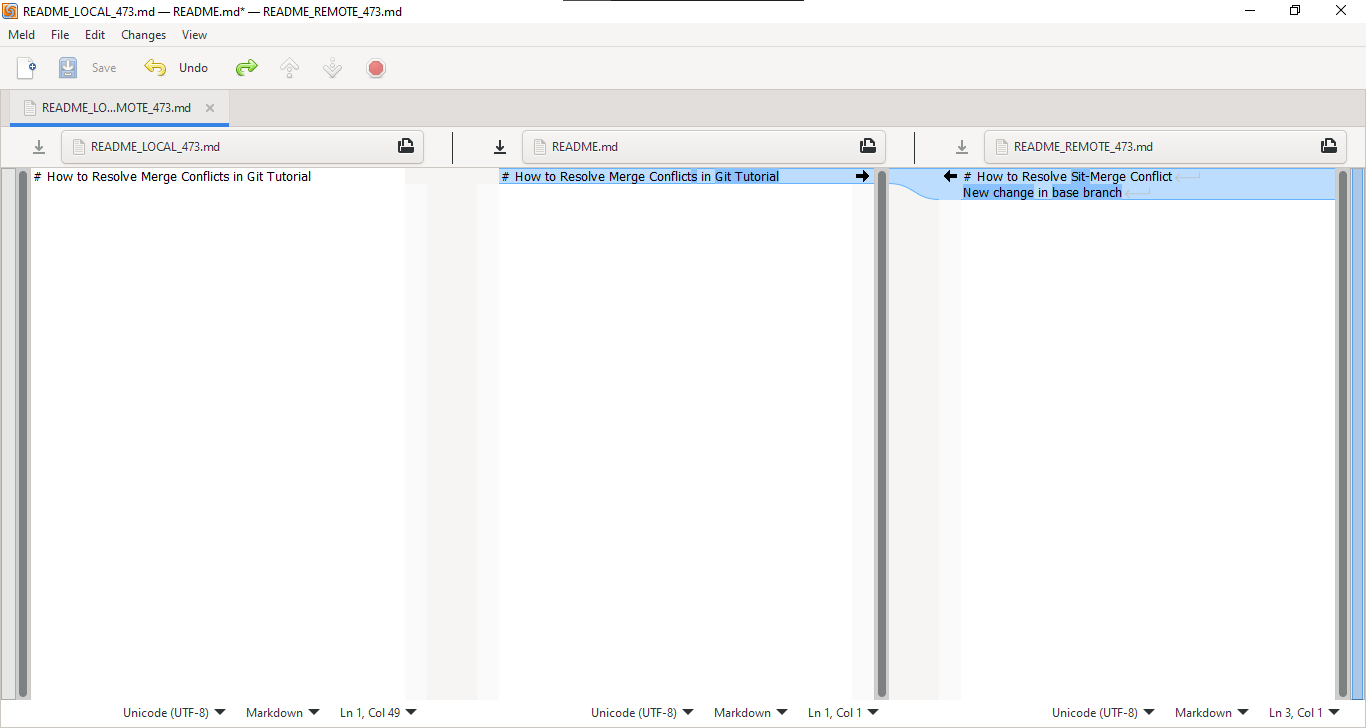 After making changes, save the file and commit. As you can see, pushing a file to a remote server does not raise a merge conflict error.

We have successfully resolved both local and remote merge conflicts. These conflicts are dealt with daily by data scientists and machine learning engineers. To improve your skills in Git operations, take an Introduction to Git course.

Resolving Git merge conflicts is a complex and highly risky task as you can break the software by merging defective code. Merge tools provide a user-friendly environment with a safer way to detect and resolve merge conflicts. In this tutorial, we have learned why Git conflicts occur and how to resolve them. We have also covered various merge and conflict types, useful Git commands, and visual tools. In the final section, we created a merge conflict and resolved it in a local and remote repository.

If you are new to Git and want to learn how it works, then read: Intro to Git and GitHub Tutorial.

Dr Selena Fisk joins the show to chat about the perception people have that "I'm not a numbers person" and how data literacy initiatives can move past that. How can leaders help their people bridge the data literacy gap and, in turn, create a data culture?

We talk with Phil Harvey about the concept of data empath, real-world examples of data empathy, the importance of practice when learning something new, the role of data empathy in AI development, and much more.

Learn the basics of probability with our Introduction to Probability Rules Cheat Sheet. Quickly reference key concepts and formulas for finding probability, conditional probability, and more.