During your data analysis in SQL, you will often need to look at multiple tables and join them to get the desired results. Joining tables for analyzing data is a required skill for a data scientist as well. In this tutorial, you will learn about different types of joins that you can perform in PostgreSQL. You will first study the preliminary concepts of joins in SQL, then learn about different types of joins and what are their syntaxes in PostgreSQL. You will finish off this tutorial by executing various types of join queries using two tables. To be able to follow along, you should be familiar with the basics of SQL and how to write simple queries in PostgreSQL. If you are looking for resources learn these, the following ones can be useful -

Setting up the database environment in PostgreSQL

Before you study the basics of SQL joins it would be a good idea to create some tables for your analyses. You will need at least two tables having at least one column in common. Although you can execute self-join queries on the same table, let's ignore that fact for the time being.

You can perform all the SQL operations on a tool called pgAdmin which generally comes with the installation of PostgreSQL. Let's open pgAdmin and create a database (give it a name of your choice) to create the tables if you don't have an existing database to proceed with. You can then create the following two tables with the specifications as given -

Note that both the tables have id column in common. You can use the following CREATE statements to create the tables -

Let's now insert some records into the tables.

SQL Joins allow you to collate two or more (sometimes just one table) tables using common identifiers. Take the example of the above two tables that you created - both the tables have id column in common. You may question the need of joining in SQL. Let's discuss this in brief.

Due to normalization constraints, you may not have all the required information present in a single table. Normalization is not only desired but also is necessary in order to maintain consistency, to reduce redundancy and to prevent several insertions and update anomalies. Consider the above two table again. Suppose you wish to find out the streams in which Sayak has enrolled. To get the answer to this question, you will need to join the two tables (sub-queries can also be used, but let's not consider that now) and then proceed accordingly.

For two tables to be joined there has to be something in common between the two. Does this mean both the tables have to have at least one column with the same name? Or what exactly is this condition?

In this section, you will study several types of SQL Joins -

PostgreSQL provides separate keywords for the types of joins mentioned in all capital letters. Let's study each of them one by one. For this, you will first study the joins visually, and then you will execute the respective join queries in PostgreSQL. 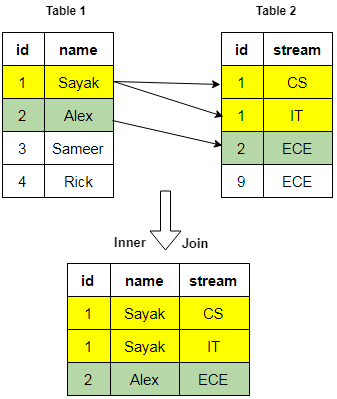 In the above example, the column under consideration is the id column. INNER JOIN will ignore rest of the columns for which the values are not common in both the tables. Let's now execute a query in PostgreSQL which would perform INNER JOIN between the two tables - student_name and student_stream.

Upon executing the following query, you get the result as presented in the above figure -

s1 and s2 are the aliases for the two tables. You used the ON keyword along with INNER JOIN. The query can be executed using the USING keyword as well -

Self Join allows you to perform joining the same table. But where this might be a good option? Suppose you have a table consisting of the following columns -

Now you want to enlist two countries in a way that their continents are the same. The following figure should give you a sense of the expected results -

OUTER JOIN can further be divided into three types -

LEFT JOIN or Left Outer JOIN: The following diagram gives you a fair idea of LEFT JOIN in SQL - 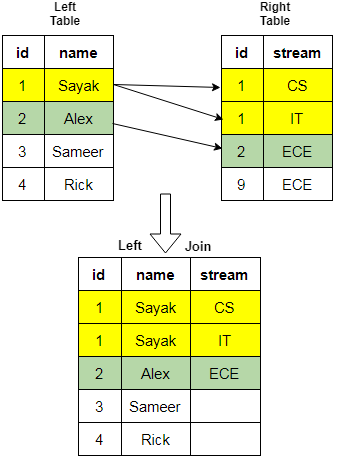 Note that unlike INNER JOIN, LEFT JOIN fetches you the records from the left (w.r.t to the order you specify in your query) table for which there was not any matching entry in the right table. This, in turn, tells you that Sameer and Rick have not enrolled in any streams. The respective query for this will be -

RIGHT JOIN or Right Outer JOIN : RIGHT JOIN is exactly the opposite of LEFT JOIN - RIGHT JOIN can help you in finding the stream(s) for which no student has enrolled. The query for this would be - 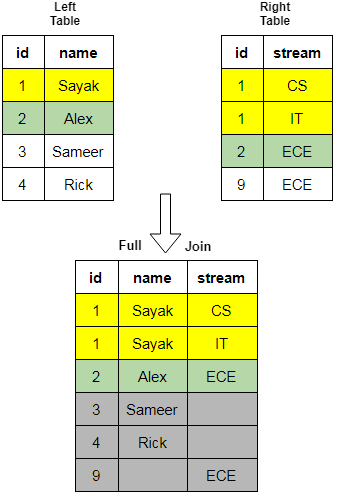 The respective query would be -

Note that you can execute all the above OUTER JOIN queries using the USING keyword. Let's now study CROSS JOIN.

CROSS JOIN is essentially the cartesian product between two elements expressed using SQL. Suppose, you need to have all the combinations possible in between two tables or even in a single table. You will need CROSS JOIN for doing this. The following figure presents this concept visually -

You already have two tables to test this out. In order to have all possible combinations between the id columns of the student_name and student_stream tables, you can execute the following query -

And you get the following result -

Let's now see the other two types of join for which PostgreSQL does not provide any direct keywords.

Let's consider the tables that you created earlier in the tutorial: 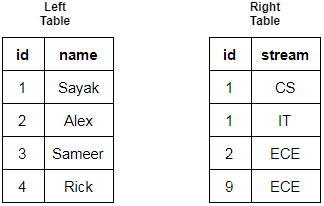 Anti Join queries are the exact opposite. In Anti Join, rows are picked up from the first table with respect to a condition (or a set of conditions) that is not matched in the second table. Here is a diagram for you to understand this visually -

The query for realizing the Semi Join would be -

Similarly, the query that realizes Anti Join, in this case, would be -

Note the use of NOT the above query.

Taking your SQL Join wizardry to the next level

That is all for this tutorial. You studied about a bunch different types SQL Joins in this tutorial and also made yourself familiar to their PostgreSQL syntaxes. If you want to practice some challenging SQL Join exercises, you should take DataCamp's Joining Data in SQL course. In fact, materials from the course were used as references to make this tutorial.

Let me know your questions in the Comments section.