Python files have two main methods for execution: using the terminal or in a text editor/IDE of your choosing. Note that a Python file is merely a program or script written with Python source code and saved with the .py file extension. There are various scenarios in which you may wish to hide your source code when sharing Python scripts with others. One way to achieve this is by converting your Python file into an executable file.

Clone this Github repository to follow along with this tutorial.

Why convert Python to an exe

Executable files - files saved with the .exe extension - are used to install or run software applications on computers with the windows operating system. The file that allows a windows computer to run an application is the .exe file.

There are several reasons you may wish to convert a Python program to an executable file. Let’s take a look at a few:

Unfortunately, some people on the internet like to spread malicious software to infect other people's devices and steal their information. One way to counter these people is to avoid playing into their scams – this means not blindly downloading or opening .exe files that are not from a reliable source.

Another reason you may wish to convert a Python file to an executable is to share an application with other users. The typical Python program may consist of several dependencies that another user would need to install before the program can run. What if the person does not know how to code? In such scenarios, expecting a user to learn to code before using an application may be unreasonable. Converting a Python file to an executable file allows users to access your program without knowing Python.

You may also wish to schedule a job on your computer to execute an .exe file at a specific time.

Now that you know what .exe files are and why you may wish to convert a Python file to a .exe file, let’s look at how to do it in Python. In this section, we will cover two frameworks: pyinstaller and auto-py-to-exe.

This demonstration will use the New York City Airbnb open data dataset.

Before data scientists can analyze a dataset, the data must be formatted to be compatible with the tools they are using. Thus, creating a validation schema effectively defines all the validations that apply to each field declaratively. This process can be quite repetitive. To prevent our data scientists from engaging in repetitive tasks, we’ve created an automated validation script to run periodically.

Note: Be extremely careful when using relative paths if your script must read data. You are better off using absolute paths to ensure your executable works as expected.

Note: we have copied and pasted this script into the pyinstaller and the auto-py-to-exe directories.

At a high level, the script above contains a function – learn more about writing functions in Python – that reads in a dataset and then defines the expected format of specific fields in the data. The next step is to convert this Python script into an executable file that could be run periodically to generate a formatted dataset.

Pyinstaller allows you to quickly convert a Python file to an executable file from your terminal. Once you’ve created your virtual environment and installed the requirements for your script (including pyinstaller), simply open the terminal and navigate to the directory where the Python file you wish to convert is located.

The next step is to run the following command:

Initially, you will see several logs of which the final one will say something along the lines of “completed successfully” – given the executable file is created successfully.

Figure 1: Logs showing the executable file being created and that it is completed successfully.

The completion of this run will create two new directories, build and dist, in the same directory as where the Python file is located. In the dist directory, you will find the validation.exe script.

Figure 2: A GIF demonstrating the execution of validation.exe on a dataset.

To run the script, simply click on it. This will bring up a console that asks you to insert the filename of the data on which you wish to run the validation. Once you enter the file's name, the console will close, and the validated data will be created in the same directory as the validation.exe file – see Figure 2.

The first step to creating an executable file using auto-py-to-exe is to run it using the following command:

This should return a graphical user interface (GUI) that will assist us in converting our Python file to an executable file. 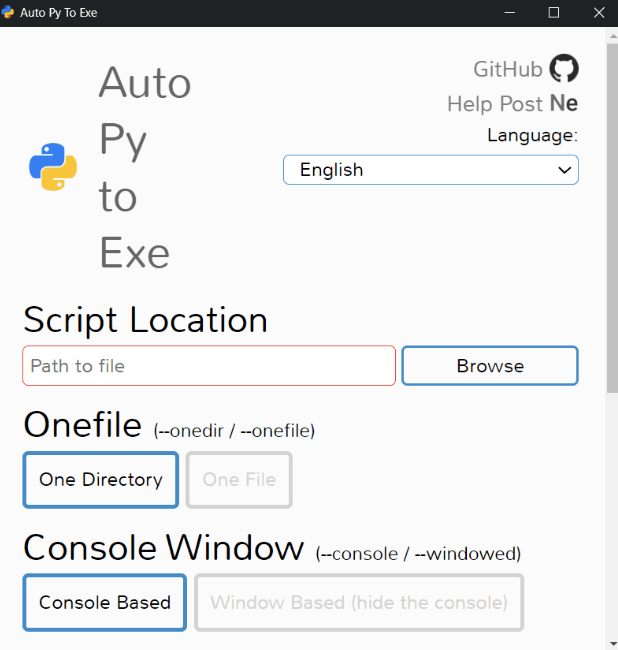 The GUI has several fields we must fill in. Let’s take a look at each one and break do:

We are also provided with other options to configure the creation of our executable file (i.e. add icons, additional files, and more). In this section, we can also modify the path for where we want to export the files generated by our executable file: to do this, select the “Settings” toggle option and browse to the output directory of your choosing. The last step is to select “Convert .py to .exe” to convert our Python file.

See the GIF in Figure 4 to see how we configured our executable file.

Figure 4: A GIF demonstrating the configuration for auto-py-to-exe

When we navigate back to the auto-py-to-exe directory, there will be a directory called output: this is where our validation.exe file lives. Select the file to run it, which will bring up a console that asks you to enter a filename:

Simply enter the file's name – in this example, AB_NYC_2019.csv – and press enter. This will close the console and create a new file in the output directory (where the executable file lives) called validated_ab_nyc_2019.csv.

In this article, you have learned:

Learn more about how you could leverage Python to do data science in DataCamps Data Scientists with Python career track.

Beginner
3 hours
333,972
Learn the art of writing your own functions in Python, as well as key concepts like scoping and error handling.
See Details
Start Course
See More
← Back to Tutorials