Editor's note: Jean-Nicholas Hould is a data scientist at Intel Security in Montreal and he teaches how to get started in data science on his blog.

Exploratory data analysis (EDA) is a statistical approach that aims at discovering and summarizing a dataset. At this step of the data science process, you want to explore the structure of your dataset, the variables and their relationships.

In this post, you’ll focus on one aspect of exploratory data analysis: data profiling.

Data profiling is all about summarizing your dataset through descriptive statistics. You want to use a plethora of measurements to better understand your dataset. Data types, missing values, mean, median and standard deviation are just a few of the many elements you’ll need to gather when profiling a dataset. The goal of data profiling is to have a solid understanding of your data so you can afterwards start querying and visualizing your data in various ways.

Know where your Data Comes from

Before jumping in any EDA, you should know as much as possible on the provenance of the data you are analyzing. You need to understand how the data was collected and how it was processed. Are there any past transformations on the data that could affect your analysis?

You should be able to answer those questions on your dataset:

If you don’t understand where the data is coming from, you will have a hard time drawing any meaningful conclusions from the dataset. You are also at risk of making very important analysis mistakes.

Additionally, you should make sure the dataset is structured in a standardized manner. The recommended format is the third normal form, also named tidy data. A “tidy” dataset has the following attributes:

Respecting this standardized format will speed up your analysis since this it’s compatible with many tools and libraries.

In this post, you will use a dataset of Craft Beers from the CraftCans website. This dataset only contains data from canned beers from breweries in the United States. It’s not clear from the website if this dataset reports every single canned beer brewed in the US or not. To be safe, you will consider this dataset to be a sample that may contain biases.

Here is the structure of the datasets you’ll be using:

The first step is to understand the composition of your dataset.

What variables are you dealing with?

You can generally fit the data in one of those categories:

You’ll first import the datasets that you can find in this repository with pandas’ from_csv function. You’ll also join the beers and breweries datasets together to facilitate analysis down the road.

With the pandas library, you can run the function dtypes to list each column and their data types.

As you can see above, that function doesn’t do a clean grouping of the different data types. The various numerical data types (float64 and int64) are not grouped into a single category as we would like to. Also, some columns are listed as objects which is not very helpful.

To go around this, you can build your own function that will determine the category of each column in a DataFrame.

The command above gives you back the following result:

With this information, you can already better understand our dataset. You know that you are dealing only with categorical and numerical data. Numerical variables can be used to extract many different measurements such as the mean, standard deviation, etc. Categorical variables are generally an interesting way of segmenting and grouping the data. For example, you might want to understand how the IBU differs between the various styles of beers.

In this section, you’ll walk through various descriptive statistics that can be used to better understand our data. You’ll notice that each of those measurements in isolation is not very helpful. The combination of those different measurement is where you can extract the most value.

The len function counts the number of observations in a Series. The function will count all observations, regardless if there are missing or null values.

In this Series we have a total of 2410 observations.

The count function will return the number of non-NA/non-null observations in a Series.

As you can see, you have 1405 non-null observations in the Series.

In this case, you are missing almost 42% of the IBU variable. This is important for you to know because it will affect your analysis. Most of the descriptive statistics will ignore those missing values and this will certainly cause a bias.

The minimum and maximum value of a dataset can easily be obtained with the min and max function on a Series.

The min/max values are helpful to understand the range of values in a variable. In this case, the IBU ranges from 4 to 138.

The mode is the most frequent value in a dataset. It can be obtained using the mode function on a Series.

In a normal distribution, the mode is equal to the mean and median.

In this case, the mode of the IBU variable is 20. It is the most frequent IBU in our dataset.

The mean is a measure of central tendency. It represents the sum of the values divided by the count of non-missing observations.

It can be obtained with the mean function on a Series.

The mean is prone to be influenced by outliers. A few extreme values can greatly change the mean, dragging it up or down.

The median is also a measure of central tendency. It is the number exactly in the middle of an ordered list of numerical values.

In the case of skewed distributions, the median is a much better measure of central tendency than the mean.

In the case of the IBU distribution, the mean and the median are in the same orders of magnitude.

As you can see above, the 50% quantile is equal to the median. It is the value that splits the dataset in half. You can also note that 75% of the observations are equal or below to 64 IBU. Furthermore, 50% of the distribution is located between 21 and 64 IBU. It’s important to note that the missing values are not taken into account in those metrics.

Visualizations are very useful in exploratory data analysis. In this post, we will not go over the topic visualizations. However, we can’t talk about data profiling without mentioning the importance of a frenquency-distribution plot. It is one of the simplest yet most powerful visualization. It demonstrates the frequency of each value in our dataset.

To create this visualization, we are using the seaborn`` library with thedisplotfunction. This function expects aSeries` with no missing values. 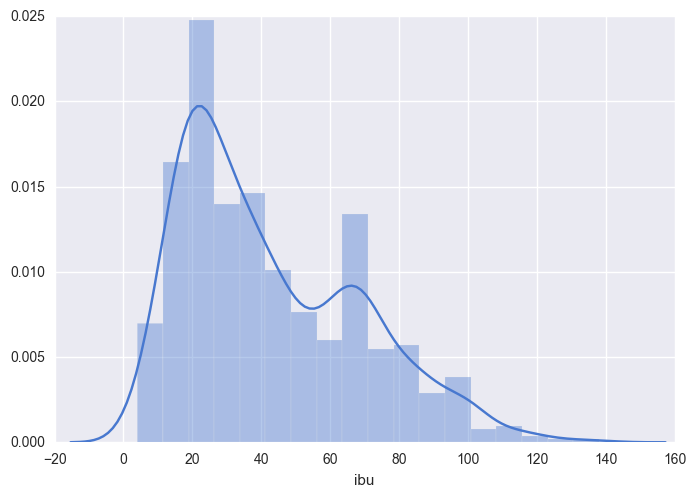 Why are there two peaks in this distribution?

What can explain this? This is an aspect that we can explore in the second phase of exploratory data analysis.

A few notes on non-numerical variables

The metrics that have been previously extracted are mostly applicable for numerical values only. If you are dealing with other types of data such as categorical data, you can still gather some interesting measurements. You could calculate the frequency of each value in the dataset.

DataFrame have a function named describe that summarizes the dataset. If your DataFrame only has categorical or text values, the summary will be adapted specifically for this type of data.

As you’ve seen above, gathering descriptive statistics can be a tedious process. Gladly, there are libraries that exist that perform all of the data crunching for you. They output a very clear profile of your data. pandas-profiling is one of them. That library offers out-of-the-box statistical profiling of your dataset. Since the dataset we are using is tidy and standardized, we can use the library right away on our dataset.

Generally, once you have profiled your dataset, you have a lot more question on it than you initially had. This is great because those new questions will fuel your exploratory data analysis.

Here are a few questions that we have gathered while doing this profiling:

Data profiling is not a linear process. As you filter and segment your dataset, you will come back to it and gather descriptive statistics on subgroups of your data.

In this post, you have seen how to profile a dataset. You now know how to attribute variables to specific data types groups. You have also calculated different descriptive statistics on the dataset and you understand how to interpret those measurements. Finally, you have seen that there are some libraries that can help you do the crunching to profile your dataset. More importantly, you have generated more questions than ever to fuel your exploratory data analysis.

Beginner
3 hours
344,418
Learn the art of writing your own functions in Python, as well as key concepts like scoping and error handling.
See Details
Start Course
See all courses
Related