Every day, we generate an unimaginable amount of data. According to Statista, the total amount of data produced globally has reached 64.2 zettabytes (one zettabyte = one billion terabytes) in 2020, and in the next five years, it is projected to grow to more than 180 zettabytes.

With this explosion of data volumes, data science and business intelligence are playing key roles in helping organizations make sense of this data. 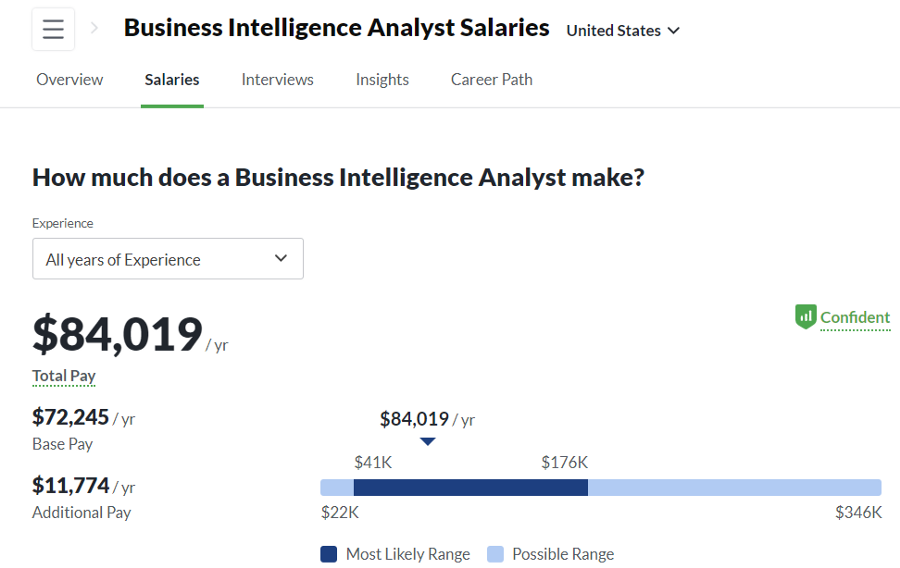 As low-code tools grow in sophistication and business intelligence functions continue to drive value for organizations, how important is a coding skill set for BI analysts to grow in their careers? In this article, we set out to answer exactly this question.

It’s hard to give a short answer without giving an overview of the evolution of the modern analyst role, the type of tasks that would require coding, and the value of learning to code. Let’s start!

The History of Business Intelligence

The term “business intelligence” was first coined in 1865 by author Richard Millar Devens when he used it in the Cyclopaedia of Commercial and Business Anecdotes to describe how a financier had successfully beaten his competitors by gathering and acting upon information.

However, the foundation for modern business intelligence didn’t arrive until the development of the hard drive disk, invented by IBM in 1956. This permitted users to store 5 MB of data, which constituted vast amounts of data at the time.

Two years later, IBM researcher Hans Peter Luhn published a journal paper, A Business Intelligence System, which introduced the principles of Business Intelligence by remarking on the challenges businesses face in dealing with and using large amounts of data to make better decisions. For these reasons, Hans is considered the father of business intelligence.

Between the 1960s and the 1970s, the first data management systems and decision support systems were developed, which would lead in the 1980s to the creation of the data warehouse, which is still used to this day.

Data warehouses are systems that collect and organize data from different sources into one central repository, allowing for more effective and deeper analysis. Fast forward to the late 1990s, the precursors to modern BI systems became a reality with technological innovations, the rise of personal computers, and the birth of the internet.

The Rise of The Modern BI Analyst

In the past two decades, the role of the business intelligence analyst has evolved greatly. The rise of big data and ever-growing data volumes led to increasing demand for sophisticated BI platforms and tools to help analysts make sense of their company’s data.

In the late 90s and early 2000s, analysts used tools such as Excel, SQL, or rudimentary BI tools to analyze and visualize their organization’s data. However, with the release of tools like Power BI, Tableau, and Qlik, modern-day analysts are expected to master various tools in their day-to-day tasks.

Outside of technical expertise in specific tools, modern analysts are expected to be experts in going wide. This means possessing strong project management skills, domain knowledge, storytelling, and communication skills, are table stakes for the modern analyst today.

With that in mind, it’s time to revisit the main question proposed at the beginning: Should Business Intelligence Analysts learn to code? The answer is yes!

Whether it’s understanding the impact of an A/B test on key metrics, building dashboards for stakeholders, and providing recommendations based on data insights, Business Intelligence Analysts solve problems on a daily basis. Learning to program can accelerate these skills, as programming offers a new lens by which to view technical problems.

The link between programming and improved problem-solving skills has been widely studied, as it trains practitioners to think about a wide spectrum of solutions to potential problems.

Business Intelligence Analysts often sit within wider analytics or data teams. This means they will collaborate with coding-first practitioners such as data engineers, data scientists, and data analysts. A key outcome of learning how to code for business intelligence analysts is better empathy and collaboration with other team members.

Learning how to code, will help business intelligence analysts craft better asks from other team members, create ad-hoc solutions that require coding skills where other team members’ time is limited, and better understand the workflows of their fellow team members. Better team cohesion can only generate better results for the wider organization.

First, Tableau and Power BI provide integrations with R and Python. This allows analysts to automate their workflows by using scripts in their favorite business intelligence tool. A key example of this is running Python in Power BI to automate a data manipulation step on a commonly used dataset.

Moreover, Programming languages, like R and Python, can allow you to build more complex data analyses and visualizations, which are not possible on BI tools. For example, with packages such as R’s ggplot2, and Python’s Matplotlib, practitioners can design extremely custom visualizations and reports.

A unique aspect of programming languages is that almost all the tools the best practitioners and researchers use are open-source. This means that anyone at any time can download the most powerful sophisticated tools for free with zero barriers to entry.

Moreover, this also means that practitioners can directly engage with the creators of these tools, providing recommendations for improvements to the source code. Belonging to an open-source community can help analysts enrich their careers, knowledge, and reputation. This means better career opportunities down the line and richer connections within the data world.

A major advantage of learning programming is the possibility to expand your career opportunities and even switch to other career paths. Business intelligence is a huge field with a lot of various career paths, such as data analysts, product analysts, BI developers, and business intelligence architects. Coding jobs are in high demand, provide great salaries and a lot of satisfaction, based on Glassdoor statistics.

Examples of such roles are data analyst positions, which are closely related to the Business Intelligence role but require a higher degree of programming and statistical knowledge. The Median Salary of Data Analysts in the United States is around $94,687 yearly and can reach up to $391K.

The Future of the Analyst Role

If this article inspired you to start learning to program, make sure to check out the resources below.

Working with Geospatial Data: A Guide to Analysis in Power BI

Discover the basics of bash scripting and learn how to write a bash script.

Working with Geospatial Data: A Guide to Analysis in Power BI