In the first part of this tutorial, you learned about several concepts including Independent and Dependent events, Permutations and Combinations, Multiple events, Expected Values, and how to calculate each of them. Now you will apply those concepts to actual poker hands that I played during my career. Along the way, you’ll learn much more about the concept of Expected Value and how to use it for making optimal decisions.

An Introduction to No Limit Texas Hold’em

Before you get started, a little background info is in order. The game that will be covered in the case studies of this article is No Limit Texas Hold’em. Played with a standard 52 card deck, Texas Hold’em is the most popular of all the poker variations. Each player tries to make the best five-card hand possible by combining their two cards with the five community cards dealt throughout the hand.

If you’ve never played or are unfamiliar with poker terminology you can click here for a concise but detailed explanation.

Anytime I ran into a situation while playing that confused me, I would mark the hand for review later. After my poker playing session was done, I'd go back through the hands that I'd marked for review. I'd break them down mathematically so I'd have a better idea of what to do in similar situations in the future.

The hands used in this tutorial were downloaded and stored in a PostgreSQL database by Hold’em Manager, software mentioned in Part I. Hold’em Manager calculates statistics from these hand histories for every opponent you play against. The data updates and displays in real time as you play.

I picked out three hands from my poker career. You'll use statistics on my opponents that I had available at the time, deductive reasoning, and a tool called an equity calculator, to make assumptions about the probability of winning the hand for each viable option.

Before getting into the analysis for the first hand, you need a better understanding of Expected Value. In Part I, you learned how to calculate your expected value for winning a \$100 dollar pot with a 75% chance of winning. There were only two possibilities:

With the help of the formula ExpectedValue=TotalValue×Probability, you calculated that the Expected Value would be \$100 * .75 or \$75.

That’s why the equation above would be better represented like this:

And what if there were a third possible outcome for the above situation?

Then, the calculation of your Expected Value will be as follows:

Now it’s time to apply what you’ve learned to a few scenarios I ran into at the poker table.

Note: When reviewing poker hands, it is common to refer to your opponent as Villain and the player being reviewed is referred to as Hero. The player you will be reviewing is ‘GamingFoSho’ which was my username at the poker sites that I played at.

In poker terminology, this is called a 3bet. The small blind and big blind make the first bet, and Hero raised them which was the second bet. There is currently \$3.70 total in the Pot. Calling is not a good option for reasons that are beyond the scope of this blog post to fully explain.

Note: that, generally speaking, playing poker passively is not profitable and playing poker aggressively is profitable. Calling is passive and betting or raising is aggressive. There are other factors related to poker strategy such as player position that indicate calling is a bad option, but would require significant explanation.

Hero must decide between raising with the plan of going All-In and betting all remaining chips or folding. Folding costs nothing so you will analyze the expected value of going all in. In this situation, I’d make a small raise to induce Villain to All-in bluff, but the calculation must be done as if I’m going All-in since that is the plan.

I had played 392 hands versus this opponent and I’ve highlighted the stats that are relevant to this hand:

Note: How did I decide these 4 points were important? Hero was in the Cut-Off position and Villain 3bet from the Button. I want statistics that show what Villain has done in previous hands in similar situations. How often does Villain 3Bet from the Button position or versus a player in the Cut-Off position? How often does Villain fold a 3Bet to a raise? The stats I selected above were the ones that best answered those questions.

Based on the above statistics, I’m going to make the following assumptions which are educated guesses;

Note: The image below represents the sample size of all possible starting hand combinations in Texas Hold’em, which were 1326 combinations, as you saw in the first part of this tutorial series. 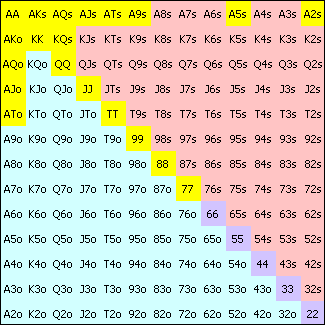 Now you can create variables for EstFoldPercent and Equity, and then create your AllinExpectedValue() function.

Now it’s a simple calculation. You need to build a function that represents the following equation:

Now plug the Hand 1 variables into the AllinExpectedValue function and print your results:

Hero wins the hand with a set (three of a kind) of Tens beating a pair of Kings.

In this situation, Hero (GamingFoSho) bet \$1.10 and has \$28.58 remaining. Villain, on the other hand, raises to \$3.80 and has \$10.66 remaining. There is currently \$5.40 in the pot. This is a similar situation as the last hand. Again, calling is not a good option. Folding costs nothing, so you need to determine if raising All-in has a positive expected value. 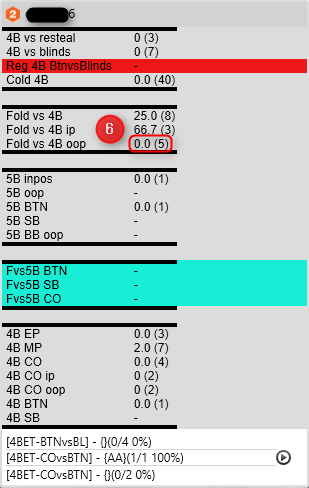 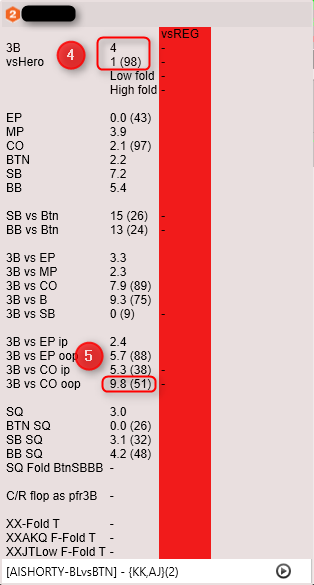 Based on the above statistics, I’m going to make the following assumptions; 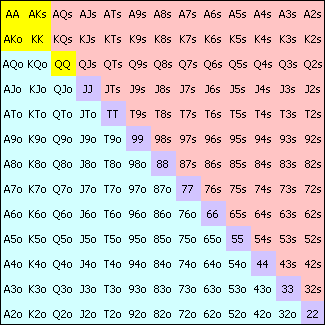 Once again, I’ll use an equity calculator to determine Hero’s equity. In this case, Hero’s hand has 35.84% equity vs. Villain’s range.

Now you can create variables for EstFoldPercent and Equity.

Now plug the variables for this hand into the AllinExpectedValue function, and print the results.

Hero wins the hand with a set of eights vs. two pairs, Aces and Kings. This was a lucky result from a decision that would lose money in the long run. The optimal play here is to fold.

Once again, calling is not a good option, and folding costs nothing. Hero must decide if raising in this situation, known as a Semi-Bluff, has a positive expected value. A Semi-Bluff is when you raise with a drawing hand, in this case a flush draw.
Hero does not have a made hand, as he is currently only holding an Ace high, but has four Hearts and only needs one more for a flush which is a strong hand. Much like the first hand, the best line of play when raising is to raise small and give Villain the opportunity to bluff. If Hero were to just go all in, Villain would most likely fold a hand like King of Hearts/Jack of Hearts. 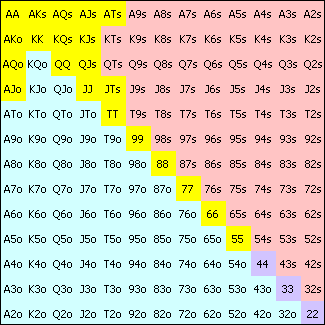 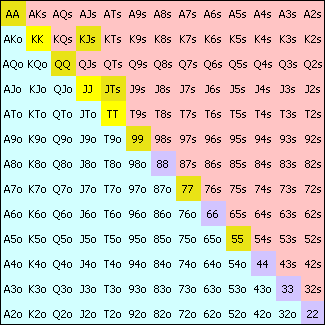 Now you can create your variables for EstFoldPercent and Equity.

Now plug the Hand 3 variables into the AllinExpectedValue function and print the results:

Congrats, you’ve now completed this tutorial on probability theory with Python! After learning about core probability concepts including Independent/Dependent events, Permutations and Combinations, Multiple events, Expected Values, and how to calculate each of them in the first part of this probability and statistics tutorial series, you applied those concepts to real life poker situations.

In this tutorial, you gained a much deeper understanding of Expected Value and used the concept to make optimal decisions at the poker table. The concept is an extremely useful one to keep in mind when making any business or financial decision, so next time you face such a decision, try to quantify your options in terms of Expected Value.

Beginner
4 hours
43,498
In this course, you will be introduced to unsupervised learning through techniques such as hierarchical and k-means clustering using the SciPy library.
See Details
Start Course

Beginner
4 hours
13,432
Are customers thrilled with your products or is your service lacking? Learn how to perform an end-to-end sentiment analysis task.
See Details
Start Course
See all courses
Related

Learn what unit testing is, why its important, and how you can implement it with the help of Python.

Learn about Python sets: what they are, how to create them, when to use them, built-in functions and their relationship to set theory operations.

Explore data analysis with Python. Pandas DataFrames make manipulating your data easy, from selecting or replacing columns and indices to reshaping your data.