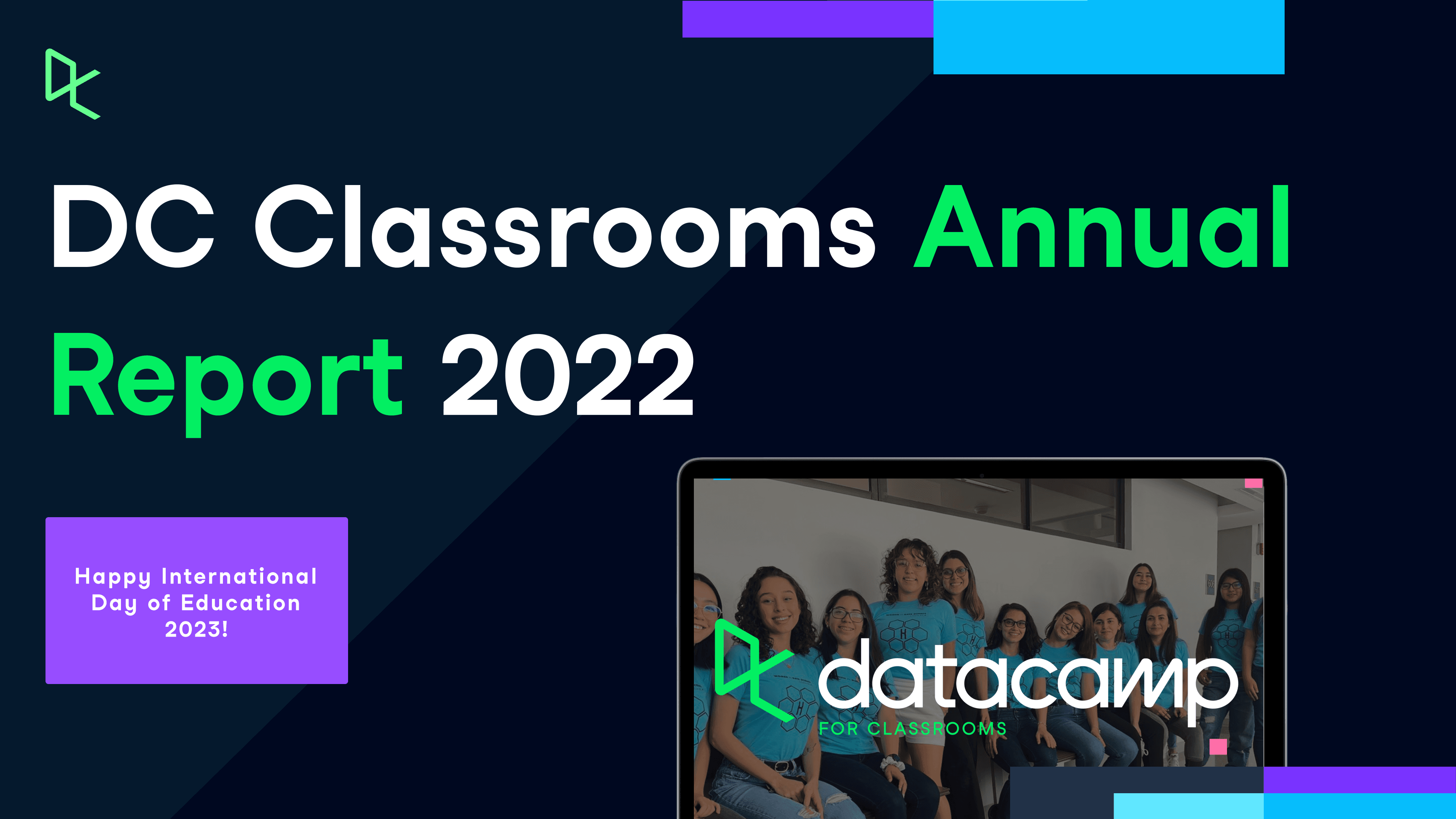 2022 was another strong showing for DataCamp Classrooms, our 100% program for teachers and students worldwide. Teachers can apply for a group account with six months of free Premium access for an unlimited number of students. This corporate social responsibility campaign has served as the data science resource for thousands of colleges and universities worldwide. This past year, we made a huge push to provide the same invaluable service to more secondary schools than ever before. Let’s dig into the data!

In 2022, educators created nearly 7,000 DataCamp Classrooms. February was the most active month of the year as teachers and students sought to make the Spring semesters more successful than their Fall. At its height, DataCamp had over 4,000 Classrooms active on the site.

Those 7,000 Classrooms translated to over 150,000 new teachers and students who received free data science education last year. During the February Classrooms peak, we reached a new all-time record for the most simultaneous Classrooms users:  130,000.

By “new teachers and students,” we mean users who have never used DataCamp Classrooms before. We are currently rebuilding our data pipeline and reporting processes to be able to determine exactly how many scholarships were distributed through DataCamp Classrooms. The beauty of the program is that it is not a six-month limited free trial; teachers can simply reapply for a new DataCamp Classroom once their old one expires, and they can keep giving access to students who had it before. Because of this, the real number of scholarships provided by DataCamp Classrooms is likely up to twice as large.

DataCamp Classrooms was introduced to over 1,000 new academic institutions that had never utilized the program before, thanks to their resourceful teachers who applied to our program. During February, the program peaked at nearly 2,000 schools simultaneously using the program.

All told, the DataCamp Social Impact and Support Teams received over 7,500 DataCamp Classrooms applications, and we’re proud of the fact that we approved 73.25% of them. Almost 500 applications were from secondary school teachers, accounting for 5% of all applications we received. Most high school applications originated from the US and UK, but we also received applications from all the new countries we added to our database in 2022: Belgium, Poland, Czechia, Australia, Canada, and France. 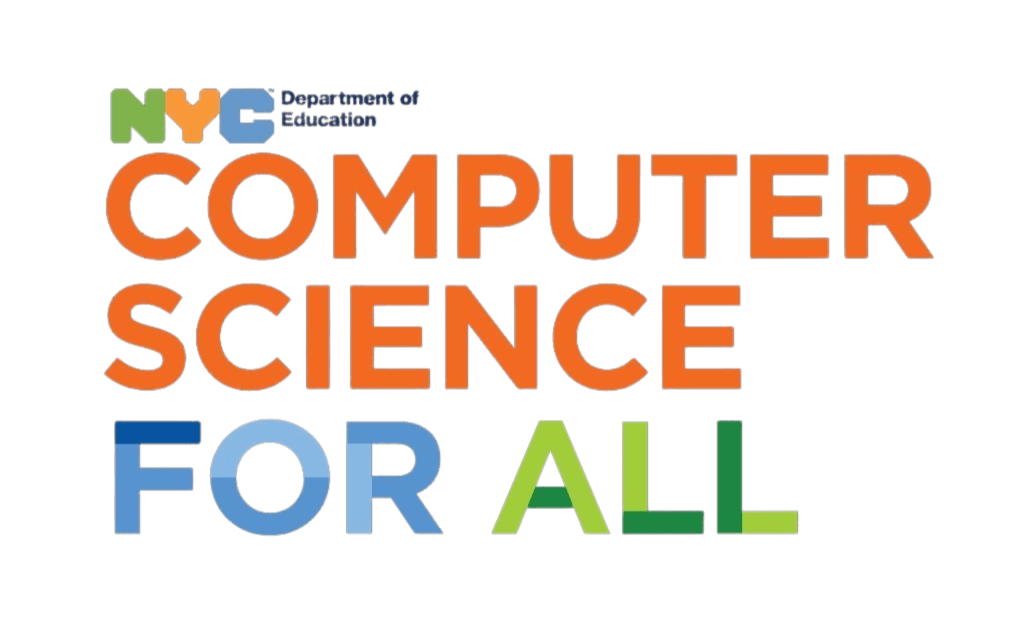 In October 2022, the Social Impact team embarked on a first-of-its-kind teaching fellowship with a public school district. And not just any public school district, but the largest and most diverse in the country: New York City’s Department of Education. Through our friends at Data Science For Everyone, we teamed up with Layla Quinones and Jose Olivares-Gomez of the DOE’s Computer Science For All campaign, whose mission is to ensure that all NYC public school students learn computer science, with an emphasis on girls and BIPOC.

The CS4All team provided an opportunity for 20 NYC public school teachers to attend paid professional learning sessions using the Data Camp platform on Saturdays throughout the school year. Representatives from our Social Impact and Curriculum teams have joined in on these sessions to provide insight into our content production process and to receive feedback from these passionate teachers on how we can make our content more accessible to teachers and younger students. What makes this fellowship so special is the diversity of the teachers, who represent most grade levels and subjects taught by the DOE and come from all five boroughs in New York City. This fellowship is not just for high school math and science teachers—middle and elementary teachers in social studies, language, and the arts are participating as well to explore how they can incorporate data concepts into their syllabi

It has been a wonderful journey working on the Data Science Teaching Fellowship, designing experiences for New York City public school teachers to learn how to integrate data science into their subject areas. DataCamp courses have provided a rigorous boot camp for our teachers so that they gain background knowledge in Python. I am excited about the outcome of this pilot: a collection of lessons designed by our teachers for all teachers so that they can integrate data science into their subject areas.

Even though students under the age of 13 cannot make DataCamp accounts currently, any teacher can use DataCamp Classrooms to further their own professional development and incorporate concepts they’ve learned into lesson plans for younger audiences. The brilliant insights we’ve received from these teachers will be invaluable as we begin conceptualizing bespoke data literacy content for high school students and, one day, younger students, too. We look forward to continuing this fellowship into 2023. Thank you, NYC DOE and CS4All, for investing in their teachers’ professional development!

Building off our cherished partnership with AI Singapore, which provides streamlined DataCamp access to secondary school teachers, 2021 was the first time we made DataCamp Classrooms available to high school teachers and students, starting with the US and UK. At the beginning of 2022, we added Belgium’s secondary schools to our database, making the program available wherever DataCamp has an office. But we knew this task was far from over. The next step was identifying the countries that could stand to benefit the most from this program but also have online presences for its schools so our Support team can reliably verify the applications.

The first country we chose was Poland since they were intaking the most Ukrainian refugees of any country. Their government’s open data on their school made this process straightforward. When a secondary school teacher from Australia reached out to provide the same offer to his students, he was able to provide us with the school data we needed to make his dream a reality.

Then we had another teacher from Czechia who, after reading our article announcing eligibility for Polish secondary school, contacted us to point out that his country was actually taking in the most Ukrainian refugees per capita. He worked with the Czech Ministry of Youth, Education, & Sports to give us the school data we needed, reproving the time-old adage that it only takes one person to make a lasting difference in the world.

Finally, we added two more countries with more unilateral processes. Our Social Impact Intern Rayan Elatmani, originally from Paris, was able to easily find and clean France’s open data on its secondary schools. We love it when governments embrace open data! All told, teachers from over 20,000 secondary schools in nine countries can now use DataCamp Classrooms.

Since DataCamp is in English, it was a no-brainer to prioritize English-speaking countries for expanded DataCamp Classrooms access, since those students stand to benefit from our education platform most quickly. That’s why we pursued adding Canada’s high schools to our database. Unfortunately, while most Canadian high schools have an online presence, we could not obtain a master list of schools and their domains from the government. In the end, the Social Impact team purchased the necessary list from Database Directories. $350 was a pittance to pay to provide world-class data science education for Canada’s teachers and teenagers.

We look forward to adding more countries to our DataCamp Classrooms secondary schools eligibility list in 2023. If you are a secondary school teacher from a country our program hasn’t reached yet, please contact us at [email protected] to collaborate on revolutionizing the way your country introduces gets young minds to computer science.

And now for the really big numbers!

Having gained much of my formative training in data science through DataCamp, I am so grateful for the collaboration and the unmatched investment that DataCamp Classrooms has made possible for students and teachers – both across the U.S. and abroad. Few organizations have done more to increase access at scale to the critical skill sets that underpin the new information economy. DataCamp’s free access opportunities help ensure students in rural communities, teachers without a local higher-education partner, or parents without their own technical skills can benefit from modern education that matters. Our team is committed to helping DataCamp meet its bold and audacious goal of impacting 1,000,000 students, and ensuring students from any background are prepared for the world of today and of the future.

Celebrate International Day of Education by Applying to DataCamp Classrooms

Teachers, apply to DataCamp Classrooms today to get the world’s leading data science education platform in the hands of all your students. We won’t ever ask you or your students for credit cards. It’s completely free for as long as you are employed by a degree-giving institution. Make sure that your name, job title, and email address are easily accessible on your school’s official website so our Support team can quickly verify your status as an educator. Read our DataCamp Classrooms FAQ for more eligibility information.

We’re always asked, why? Why does DataCamp give away one of its best packages for free to hundreds of thousands of people a year? We relinquish over 10% of our yearly revenue to run DataCamp Classrooms because we believe the teachers and students of the world hold the power to evolve how we teach and learn about our world and our time in it. Please help us further democratize data science education in 2023 by bringing DataCamp Classrooms to your school.

Q3 2022 was another record-breaking quarter for our CSR campaign! Let’s dive into the data and celebrate our partners’ successes.

Here’s a breakdown of one the best quarters ever for building data literacy amongst teachers and students worldwide, thanks to DataCamp Classrooms. We also highlight the contributions of our fantastic interns.

Explore the findings from the DataCamp Donates 2020/2021 Report and learn about DataCamp's social impact.