Julia is a relatively newer programming language that was first released in 2012. Even though Julia has only been around for ten years, it has been growing rapidly and is now one of the top 30 programming languages according to the October 2022 TIOBE index. 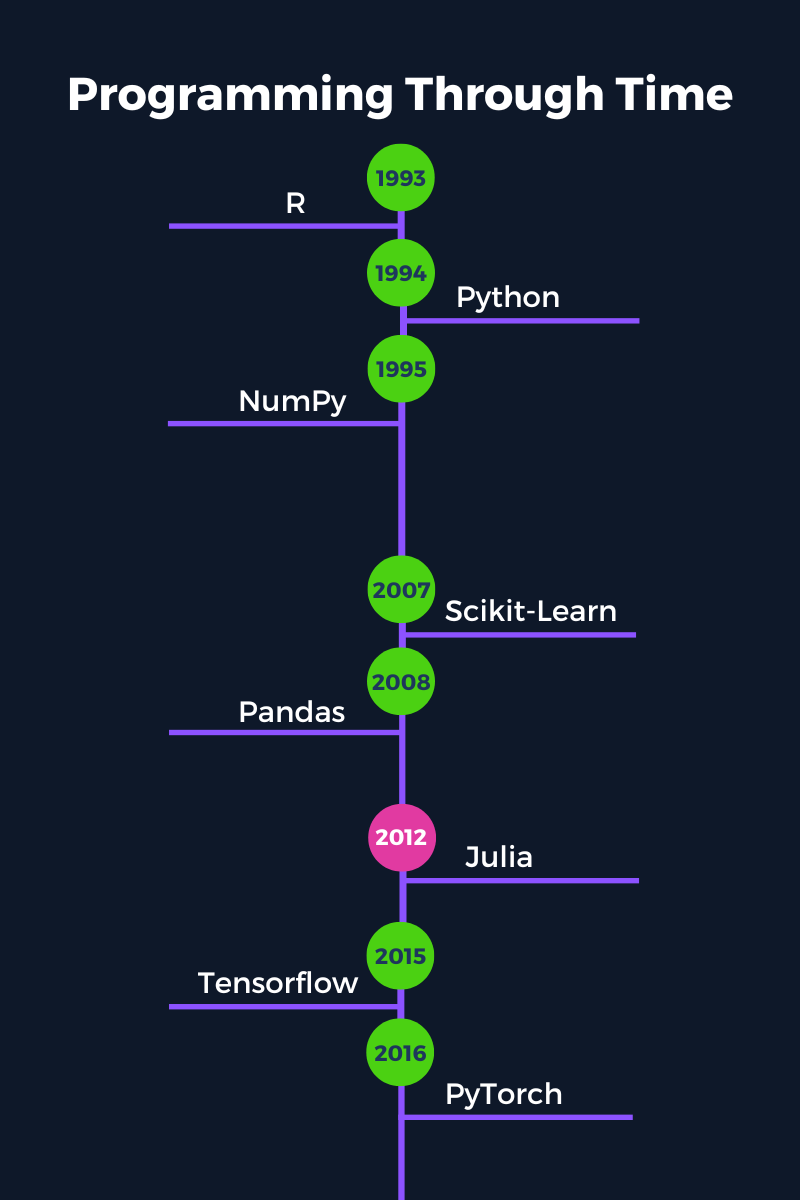 A standout feature of Julia is that it was built for scientific computing. This means that Julia is both easy to use and fast while also capable of handling large amounts of data and complex computations at blazing speeds. A famous Julia tagline is that it "runs like C but reads like Python."

Julia is a compiled language that reads like an interpreted language. Most other traditional compiled languages (such as C or C++) capable of solving computationally intensive problems must first be compiled into a machine-readable format before it can be executed.

On the other hand, Julia can achieve the same performance with the simplicity of an interpreted language (like Python) but without needing to be compiled before executing. Instead, Julia uses a Just-In-Time (JIT) compiler that compiles at run-time.

Why Choose Julia for Machine Learning?

Python has dominated the data science and machine learning landscape for a long time, and for good reason. It is an incredibly powerful, flexible programming language. However, there are some downsides to Python that are non-issues in Julia.

Some of the Python downsides compared to Julia are:

In this section, we go over several reasons why Julia is a great choice for machine learning.

You can further explore the rise of the language and whether Julia is worth learning in 2022 in a separate blog post.

1. Simplicity & Ease of Use

Julia has a very friendly syntax that is close to English. This makes it much quicker to pick up and learn since the code is often intuitive and easy to understand.

Julia is also quick and easy to install and get started with right away. There is no need to install special distributions of the language (such as with Python and Anaconda) or to follow any convoluted installation process (like with C and C++).

One of Julia's greatest hallmarks is its speed. We mentioned above that Julia is a compiled language, providing considerable speed improvements over interpreted languages.

Julia belongs to the "petaflop club" together with C, C++, and Fortran. That's right; this exclusive club has only four members and one requirement for joining: simply reach speeds of one petaflop (i.e., one thousand trillion operations) per second at peak performance.

It’s not uncommon to encounter large amounts of data in machine learning, so using a fast programming language can significantly improve training times and reduce costs when deploying models into production.

In Julia, there is no need to vectorize code to increase performance. Writing devectorized code in the form of loops and native functions is already fast. While vectorizing code in Julia may result in a slight speed improvement, it is unnecessary.

Writing and using devectorized code can save you a lot of time when building machine learning models since you will not need to refactor code to improve the speed.

Julia uses duck-typing to 'guess' the appropriate type for a function. This feature means: that if it walks like a duck, and talks like a duck, it's probably a duck. So, any object that meets the implicit specifications of a function is supported - no need to specify it explicitly.

Multiple dispatch is useful in machine learning because you do not have to think of every possible type that can be allowed to pass to a function. Instead, packages in Julia can remain highly flexible while also being about to share code and types between different packages.

Consider the date format: there are several packages available that use their own custom date and date/time formats. For example, you have Python’s built-in datetime format as well as the Pandas datetime64[ns] format. In Julia, there is just a single date-based format shared across all packages from the built-in dates module.

Packages are managed automatically in Julia with Pkg. Pkg is to Julia what Pip is to Python, but much better. Environments are managed in Julia through two files: Project.toml and Manifest.toml. These files tell Julia which packages are used in the project and their versions. Instead of defining special environments externally, the folder location of your Julia files (containing the Project and Manifest toml files) becomes the environment.

This kind of built-in, simplified approach to package management makes it easier to share and reproduce your machine learning projects and analyses.

Did you know that only 20-30% of Python packages are actually made up of Python code? 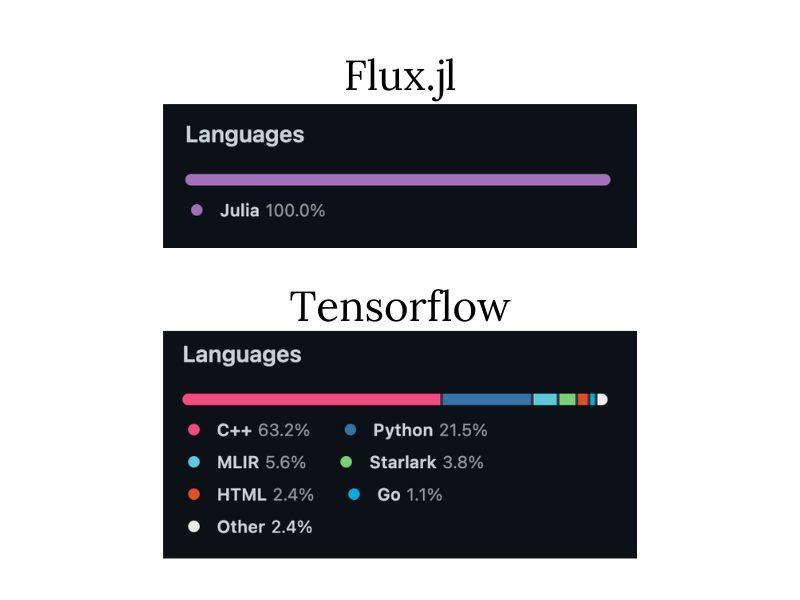 This reliance on other languages is because, in order to develop packages that are efficient and effective at their tasks, they must be built in low-level languages like C and C++.

As you can imagine, this is a slow, inefficient process not just for the initial development but also for long-term maintenance and new features.

On the other hand, packages in Julia can be prototyped, developed, and maintained in Julia. As a result, this cuts down the entire development cycle to just a fraction of the time.

Julia now contains over 7,400 packages in its general registry. While this is far from the sheer volume of packages available in Python (over 200,000), finding the right package to solve a specific problem can still be challenging.

This section will explore the main packages you will need to analyze data and build machine learning models.

Below is a list of some of the most common packages you will encounter in machine learning projects - from importing, cleaning, and visualizing data, to building models:

There are also many implementations and wrappers that are available for popular Python packages such as Scikit-Learn and Tensorflow. However, you don’t necessarily need to use these packages, as you may lose out on many of the powerful advantages of using Julia (such as speed and multiple dispatch).

Getting Started with Julia for Machine Learning

One of the best ways to get started with Julia is with the Pluto notebook environment. In this section, we discuss the benefits of using Pluto, especially at the beginning of your data science journey when you're still learning how to build machine learning projects with Julia. We also go over some of the best resources to use to learn more about Julia and machine learning.

Pluto is a simple-to-use interactive Notebook environment with a friendly UI. This simplicity makes it very well suited to beginners starting with Julia. Pluto also has many additional features that allow you to build even more compelling machine learning solutions almost effortlessly:

When evaluating one cell, Pluto will also consider which other cells must be run. This feature ensures any dependent cells are updated before the current cell is evaluated.

A great thing about Pluto is that it is smart enough to know exactly which cells are required to run in addition to the current cell so that you don't run into the problem of needing to update every cell if you make a change somewhere in your notebook.

Pluto also cleans up old or deleted code and updates the output of any dependent cells to reflect this action. If you define a variable in one cell and later delete that cell, Pluto will also delete that variable from its namespace. In addition, any dependent code cells will show an error message to show that the variable it needed has now been deleted.

Reactivity causes automatic interactivity between cells. This is especially useful for quickly creating interactive charts or objects that are automatically updated when a variable changes.

The beautiful thing about Pluto is that that variable can be an interactive widget in the notebook, such as a built-in slider or text box. You can even design your own widgets if you know Javascript.

Reactivity and interactivity allow you to produce dynamic reports and dashboards based on your machine learning models and data analyses. The key to a successful machine learning project is communication and Pluto makes it much easier to demonstrate and explain your project.

Pluto integrates seamlessly with Pkg to allow automatic package management in your notebooks. Not only that, but you don't actually need to install packages outside of Pluto. All the information Pluto (and Julia) needs to run and reproduce your notebook is stored right inside the notebook itself!

This means that you can share your notebook with colleagues or classmates, and you can be sure that all the right packages that that notebook needs to run will go with it.

All Pluto notebooks are stored as executable .jl files. If you open up a notebook in a text editor, it will look a little different from the notebook you see in your browser. The file will contain all the information needed by the notebook, such as the code, the cell dependencies, and the order of execution. However, these files do not contain any output. All of this makes version control using Git and GitHub much easier.

Pluto notebooks can be exported as a .jl executable file, a static PDF, or a static HTML file. If you export as HTML, then the person you share it with will also get the option to download and edit the raw notebook file without having Julia installed on their machine.

Pluto achieves this by partnering with Binder - a free platform that hosts Pluto notebooks online (it also works with other programming languages, like Python and R).

This feature is the last step in a machine learning workflow: first you conduct your analyses, then you build an interactive report in your notebook to demonstrate the results, and lastly you are able to share the notebook with technical colleagues, who are able to reproduce and edit the analysis, as well as with those that are non-technical.

These are some of the most highly recommended resources for learning about the Julia programming language and how to use it in data science and machine learning:

Take our Introduction to Julia course

What is Julia Used For? 10 Applications of Julia Programming

What is Julia Used For? 10 Applications of Julia Programming

Discover the applications of Julia programming language and find out some of the industries using Julia today.

Discover the basics of bash scripting and learn how to write a bash script.