It may seem unusual that someone can be more experienced in Python and SQL than typing on a physical keyboard, but that’s exactly how some people started off their careers in data science. Felix Ayoola, a learner and partner of ours in Nigeria who previously commended the DataCamp for Mobile app, continues to sing its praises: “A lot of people here who were gifted access to data science education through DataCamp Donates started off learning on their phones—in fact, much of the tech community as a whole here have similar stories of using a mobile phone as a crucial first step in their learning journey. There’s a data scientist friend of mine who was gifted a laptop after she had spent years learning on a phone—this proved to her family that a laptop would be a worthy investment. There was also someone I know who learned coding exclusively from his phone and started up his own recruitment business. Through the earnings, he was able to afford a laptop.”

Why are some people using mobile phones to learn coding?

Personal finances are the main driver of this. “Very few people in Nigeria can afford both a phone and a computer,” Felix continues, “and because a good-quality phone can cost half the price of a second-hand old laptop, we often start off there. Additionally, broadband is very expensive here, much more so than data. A quirk of Nigerian cellular services is that you can get some data packages very cheaply but they can only be used at night. As a result, many of us get one of these and do any data-intensive activities at night—this can include DataCamp courses.”

“Because of the challenges associated with accessing a PC in my country, DataCamp enhancing the mobile phone learning experience is a great way to broaden access to data science education.”

An increasing usage of DataCamp for Mobile

DataCamp for Mobile was initially born to supplement learning on the PC, as a quick and easy way of getting some practice in while learners have five minutes to spare. However, as DataCamp usage has picked up throughout the developing world, the dynamics of mobile usage have shifted, too:

Understanding how this happened goes hand in hand with understanding the proliferation of cell phone usage in the developing world, including the reasons behind this and the effects.

Once just a little device for talking to people, now the cell phone is a mini-computer that can do all sorts of amazing things thanks to built-in features and a plethora of apps—anyone who remembers early iPhone adverts telling us “there’s an app for that” will remember how revolutionary this was.

But moreover, smartphones and the contracts they come with are cheap. At least, some brands are. The crux of it all is, you can get a lot for little thanks to them. Nowhere is this made more apparent than in the developing world, where their usage is skyrocketing. Nowadays you’d be hard-pressed to find a country in which fewer than 70% of people own or share a cell phone. PC ownership, however, remains low. 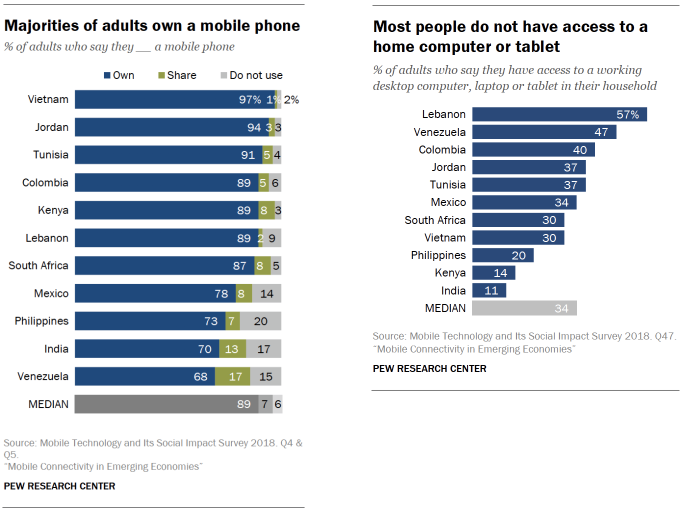 And this isn’t solely the result of developing countries having expanding middle classes: even on the lowest incomes, people find themselves able to afford access, at the least, to a cell phone. This can be through sharing a device like the widespread existence of one-device households in India or through allocating a huge portion of this income to their phone bill (for example, the World Bank reported that for the median African cell phone user this portion is 13%).

Cell phones have changed lives for the better, beyond the happiness of being able to contact loved ones or share one’s life on social media. M-Pesa, an app used for transferring money and receiving loans, is used by at least 96% of households in Kenya and has been credited with improving the financial situation of 1 in 10 Kenyan families living in extreme poverty. Cell phones can also be invaluable when hardship strikes: 90% of Syrian refugee households in Lebanon own a cell phone, using them to access information, transfer money, stay in touch with friends and family, and translate foreign languages into their own. Today communal charging stations are a near-quintessential facility in refugee camps.

Mobile technologies have been able to answer some of the more unique challenges in education in the developing world. Illiteracy is being combatted through free learn-to-read apps and voice-to-text technology, which has been especially useful for visually impaired individuals. Also, practice makes perfect: the thought that a collection of printed books might be more expensive than a mobile phone with access to a digital library would have been unthinkable years ago, but such have the times changed.

In line with DataCamp’s mission to democratize data, we have enhanced the learning experience on mobile. We are working on making the app experience faster, which will have a big effect when running code in the app on a cellular connection, and negate the effect of slow internet. We are exploring translating the app into Hindi and Spanish since these are two of the most commonly used languages in the developing world. We have also expanded the amount of content available through the app, from offering entire courses to short lessons complete with coding exercises so that one can gain a sizable amount of data science education without ever needing to touch a PC.

Individuals from one of DataCamp Donates’ partners, DSC Suffa, recently gave the following testimonials regarding Mobile:

“Mobile was my first experience with DataCamp. It was a very smooth and easy process with hands-on practice provided. The app is an amazing feature that allows me to complete my learning from anywhere, with a practice platform that runs easily on it too. The points I earned after watching completing exercises were a constant push and motivator to do more and excel. Thanks a lot DataCamp for this amazing opportunity!” -Syed Husnain Haider Bukhari

“Just like DataCamp's desktop portal, the mobile app is equally fast, efficient, responsive, and interactive. The interface is quite engaging and user-friendly which makes navigation very easy. Also, the learning notifications and performance tracking mechanism play an instrumental role in keeping me motivated and thus help me do at least a few exercises regularly. The only thing I'd like to be included in the app is a view of the leaderboard. Other than this, the app is doing excellent and the developers at DataCamp deserve great appreciation for it.” -Omar Hanif

“It’s a great app, portable, easy to use, and convenient. Plus it has a built-in shell and code editor so you don’t have to worry about the coding stuff if you are away from your system. It has all the features of its desktop site. I would highly recommend that others give it a try.” -Ali Raza Ali Qadri

DataCamp Mobile is free to install and available on the Apple Store and Google Play. We also have an app-exclusive feature known as lessons, which consist of a short video followed by 3-6 coding challenges. There are typically fifteen lessons per course, and Mobile allows you to take one lesson for free every day—perfect for keeping your mind sharp!

A huge thanks to Felix Ayoola, who inspired the writing of this article. He works as a freelance designer, and if you would like to get in touch with him you can do so through LinkedIn.

FT Ranking: DataCamp recognized as one of The Americas’ Fastest Growing Companies 2022

In this episode of DataFramed, we speak to Nick Singh and Kevin Huo on their latest book Ace the Data Science Interview.

This veteran DataCamper talks about her path to our company, her start as a Content Developer, her transition to our Data Science Team, and her favorite moments and memories from her four years with us.

Meet Hettie McConnell, software engineer at DataCamp based in London. In this interview we talk about her journey towards joining DataCamp and how she got into engineering.

FT Ranking: DataCamp recognized as one of The Americas’ Fastest Growing Companies 2022

DataCamp grew by over 400% in the past three years, making it the second fastest growing education company, and the 167th fastest growing company in North and South America.