How has DataCamp aided you in your professional life?

Joshua Beron: I work for this startup called SmileMD as a scrum master, a company that delivers anesthesia services to patients. It really gives a whole new meaning to your work when you’re able to use your skillset for social good. I’ve continued to learn on DataCamp primarily so that I can communicate with the data scientists in my company.

Oleh Pasko: Having left my last job, I’m now searching for alternative employment, and I find putting my DataCamp certificates on my LinkedIn has helped a lot in getting noticed by recruiters. I’m constantly getting asked, would you like to consider this and that opening, so I’m in quite a strong position. The real benefit of DataCamp is that I have been able to do my learning in a self-paced way and that has really helped me to show to recruiters that I am enthusiastic about continuously upskilling.

Sean Mulready: I work in aerospace on algorithm development for Autonomous Systems. DataCamp has helped in a couple of ways. There are specific bits of information that I learned from DataCamp that I was able to apply directly to something I was developing. Additionally, during periods of work where my workload was more administrative, DataCamp allows me to keep working my analytic muscles.

I tried a lot of different platforms but ultimately DataCamp was my favorite.

How did you discover data science and why did you choose DataCamp?

Joshua: My interest in data came from an interest in hockey when I realized that we could use it to answer all sorts of what-if questions. When I was in college studying computer science I found that DataCamp covered so much that my school didn’t in an easy-to-understand way.

Oleh: My first exposure to technology was in the early 90s when a computer terminal was brought into my school, a rarity back then in Ukraine. Following in my father’s footsteps, I joined the police after high school, training in their university to join their IT department. I worked there for eighteen years and this saw me using databases and analyses to monitor crime patterns, not just in Ukraine but also in Kosovo, Liberia, and Sudan when Ukrainian police officers were tasked with helping the United Nations on peacekeeping operations. It was a pretty interesting career for me, and ultimately working with all this data meant I wanted to learn more in order to improve my skillset. I tried a lot of different platforms but ultimately DataCamp was my favorite.

What has kept you motivated to learn?

Joshua: The driving force behind a lot of what I do comes from my sister. On top of other health issues, she has this really rare neuromuscular disorder called Charcot Marie Tooth, and that’s given a personal angle to what I do. I’ve always sought to be the best brother I can and helping her really instilled that empathy in me, but moreover, it’s the fact that she’s kept herself going through it all. She’s very sharp, training up to be a psychologist, she keeps herself in good shape and she’s a very kind person, and I think that really inspired me to do the best I can.

Oleh: Staying motivated isn’t too difficult for me since I just have it on my to-do list and it’s become a habit, though I would say the first 21 days were the hardest. But once you reach a certain point, a certain number of days, you start thinking to yourself, “I can do this” and you keep it going.

Sean: If you're not investing time in improving yourself, it's easy to become complacent and plateau or even potentially set back your career. With all the offerings for online coursework at sites like DataCamp, there's never been a better time to get back into learning or maintain a learning regimen. Even if it's only a few minutes at a time, I think everyone should be learning on at least a semi-regular basis.

How much time do you spend each day learning on DataCamp

Joshua: Generally the five-minute bracket, but I would sometimes have days when I’d have more time on my hands, and that was when I would do courses or assessments—half an hour, an hour, say, and I started to put DataCamp certificates of completion on my wall. That also kept me going, kept me thinking “OK, what’s the next one?”

Oleh: I typically do only five minutes a day, but there are times when I will have more time to spare so I can do a chapter of a course. Sometimes I will do multiple chapters if I am getting close to the end, since I love the feeling of completion that comes with it!

Sean: Typically five minutes a day. Before my son was born I exclusively focused on MOOCs for learning. DataCamp made it easy to get back into learning without committing to a full course load of material. A goal of mine for the next 1,000 days is to more regularly dedicate 30 mins to an hour for learning.

Were there any days when you came close to losing your streak?

Joshua: The app has saved my bacon a few times: there was one time when it was something like two minutes to midnight, and this was on day five or six hundred. I only really remembered because my Uber was running late and, as you do, I pulled out my phone and started to ponder ways to kill time—and that’s when it hit me.

Oleh: Honestly, I did not have any days when I came close to losing my streak since I could see any “difficult days” such as catching a flight coming, so I would plan accordingly—doing it in the morning, for example.

Sean: Yes, I had other streaks over 100 days beforehand that ended because I missed a day. For this streak, I had a near miss once when my last cell phone died and I had to replace it.

Do you have any advice for other learners?

Joshua: It’s about having some self-love, thinking about what the best version of yourself would be, and using the tools at your disposal to bring that about. And that goes for learning—sometimes we have to act independently from systemic education, so we have to be willing to take on something a bit more self-paced and self-assessed.

Oleh: Set up daily reminders on your phone, and make sure they come at times when you likely won’t be too busy. And plan ahead for any days when you might be, so that you can schedule your practice for another time.

Sean: Quite a lot, but my top three tips are: 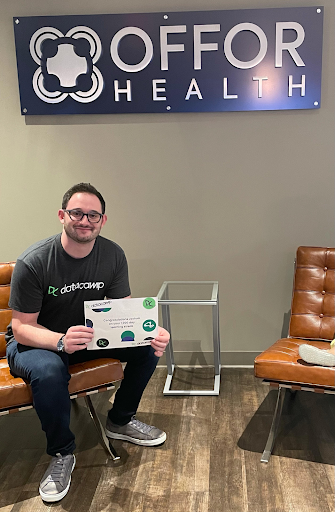 As a “well done” from DataCamp, we sent Joshua and the rest of the learners some merchandise!

By request of Joshua, we would like to draw your attention to a fundraiser his family has set up to help fund research into CMT, the condition his sister and many other teenagers have. If you would like to help, donations are currently being matched by the CMT Association!