Education is a Basic Human Right

In 2017, DataCamp’s founders established DataCamp for Classrooms, a free way for colleges, universities, teachers, and students to access DataCamp’s entire catalog. It was a bold step to give up 10% of the company’s revenue. However, this decision came from the founders’ fundamental belief that education, including data literacy, is a basic human right, as established by the United Nations Declaration of Human Rights. As an extension of that, we at DataCamp believe that quality data science education should be available to all teachers and students, regardless of whether they can afford it.

Bad Times Bring Out the Best In Us

Since its induction in 2017 and by April 2020, 300,000 teachers and students worldwide have received at least six months of free data science education on DataCamp. At that time, the COVID-19 pandemic was in full effect. As a result, over the spring and summer of 2020, DataCamp Classrooms saw another 50,000 new accounts added, a number that was previously unheard of for the academic off-season.

The pandemic was creating an even stronger need for data science education, not only for college students, but also for adults across various socio-economic backgrounds.

People realized that on-site professions might not be as readily available as they were prior to 2020 and that survival will mean a career change, quite possibly one that will involve overall literacy, as well as data literacy.

Recognizing that need, and based on the work done by DataCamp Classrooms, Martijn Theuwissen, DataCamp’s COO and Executive Assistant, Nathaniel Taylor-Leach, came up with the vision that would become DataCamp Donates. First, we would allocate free DataCamp licenses to nonprofits working with disadvantaged communities. Next, our nonprofit partners would distribute those licenses to people in need, giving them access to skills that could unlock life-changing careers in data.

Evolving the Program to Match the Need

Each DataCamp license sold during special promo periods was matched with a free DataCamp Donates license for a partner organization. Word of mouth spread so fast that applications poured in. Once the program was up and running, DataCamp broadened the eligibility criteria to include more organizations:

While most of DataCamp’s efforts and resources would go to nonprofits dedicated to providing free training and job placement services to underemployed individuals, we also opened up a small percentage of the DataCamp Donates program to nonprofit research centers. This decision helped a select group of data experts working with NGO charities sidestep budget cuts and perform necessary, cutting-edge research in universally beneficial fields such as health care and biodiversity.

In addition, DataCamp target personas were also defined to help our nonprofit partners to allocate the licenses correctly:

These guidelines ensured DataCamp Donates was attracting the interest of suitable nonprofit organizations to ultimately get DataCamp in the hands of those who need it the most. That also helped shift from pursuing American nonprofits to organizations in emerging countries, primarily in the Middle East, Africa, and Southeast Asia, where the average income and job availability are lowest.

By the end of the initial thirteen-month period after DataCamp Donates’ launch, we gave free licenses to nearly 20,000 learners across 99 partner nonprofit organizations. Let’s uncover the data!

Stats from the First Year of DataCamp Donates

DataCamp Donates Partners gave free access to 20,113 learners. Of those, 12,232 took at least one course on DataCamp, giving the program an adoption score of 68% in its first year. 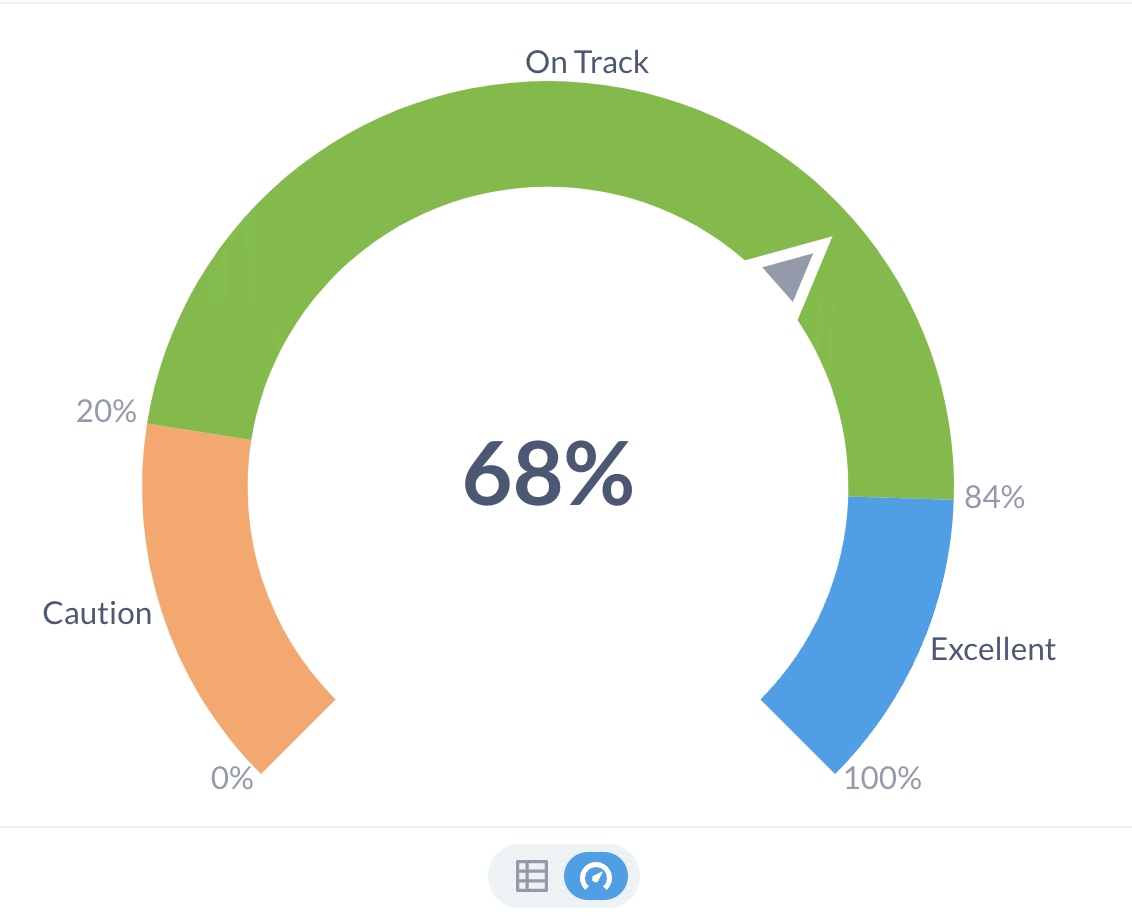 DataCamp approved 99 applications out of 129 submissions.

73% of donations went to organizations in Africa and Asia. These continents have the greatest need for skilled tech workers, and there is otherwise a lack of accessible data science education for the poor.

Of the almost 20k learners who started on DataCamp, 12,091 completed at least one course, giving us a high DCD engagement score of 46%.

Python was the most popular technology amongst DataCamp Donates learners, followed by R and SQL. An amazing 47% completed the course Introduction to Python. 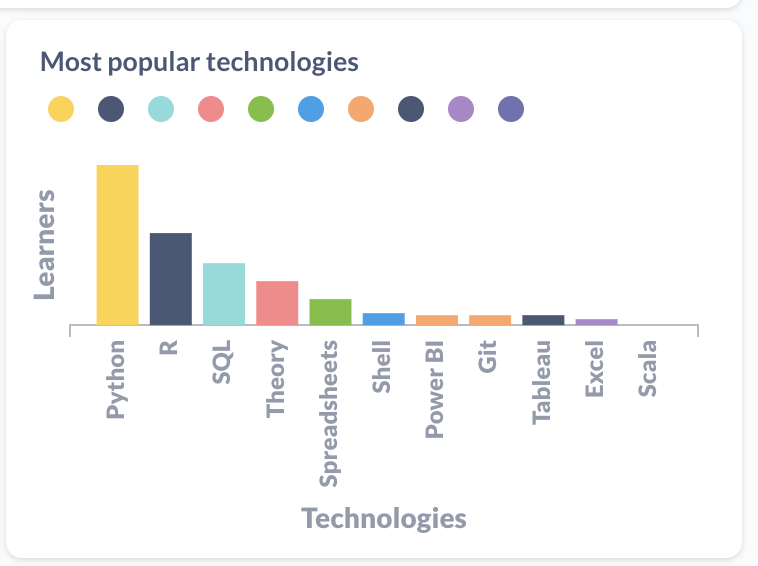 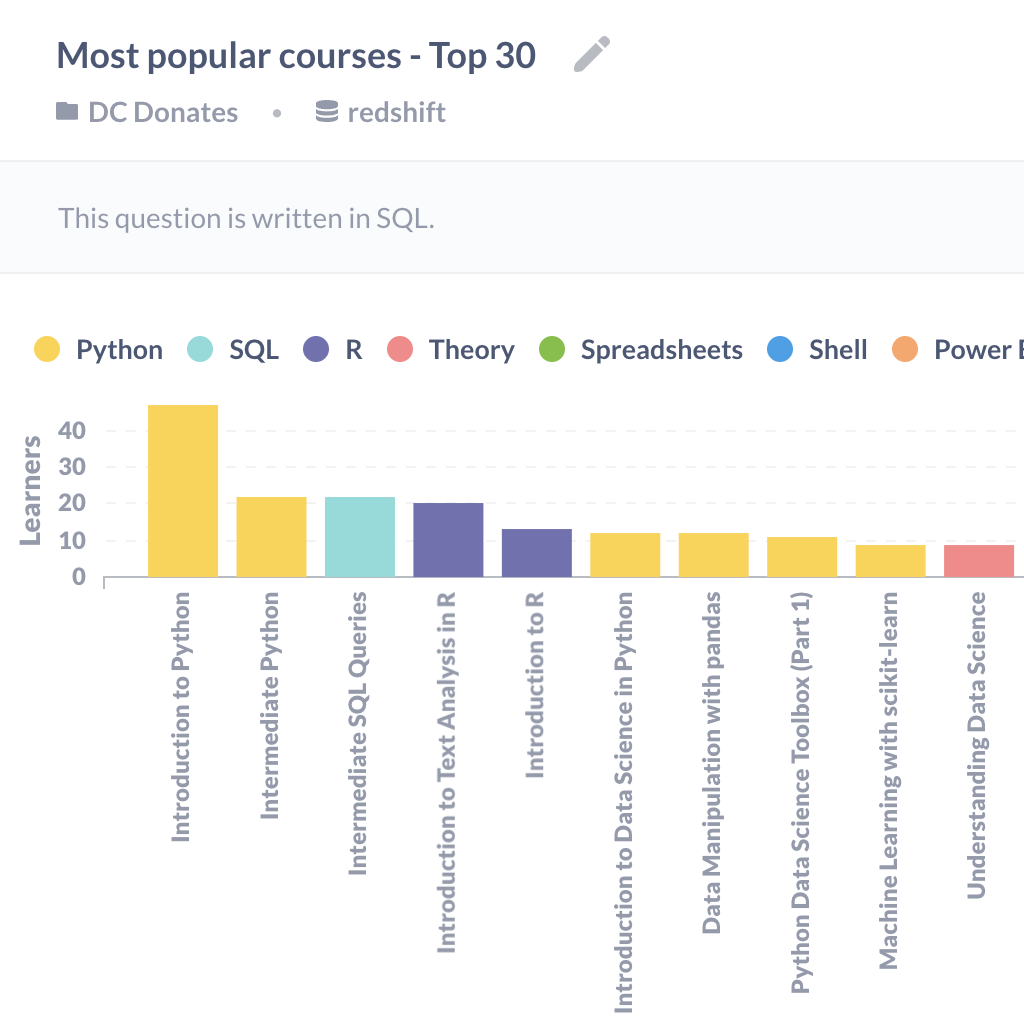 The most popular topic was Programming, touched by a whopping 81% of DataCamp Donates learners. In fact, 37% of all learners completed the Python Programming skill assessment. 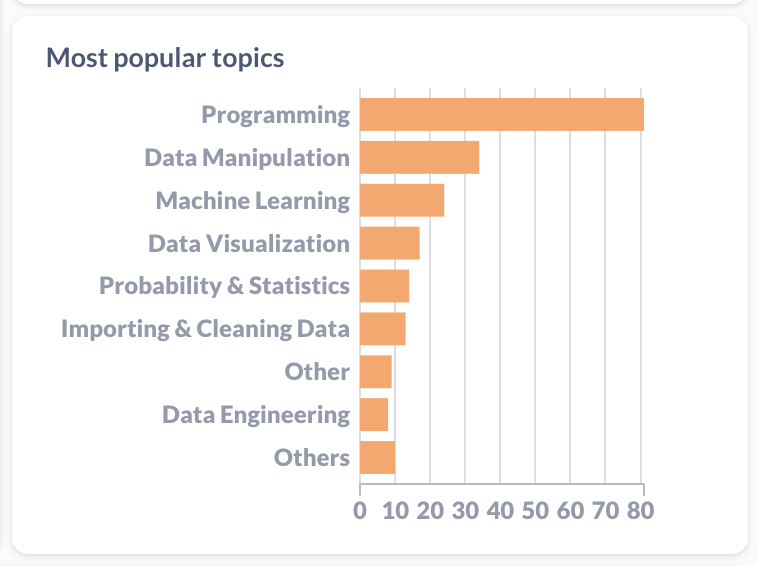 DataCamp for Classrooms expanded to high school teachers and students for the first time. In May 2021, US high school teachers were eligible for the same free access college professors had been enjoying for years. Remarkably, high school applications accounted for 3% of all Classrooms applications and increased to 5% over the summer of 2021. This is especially impressive considering this feature was soft-launched at the end of the US academic year. 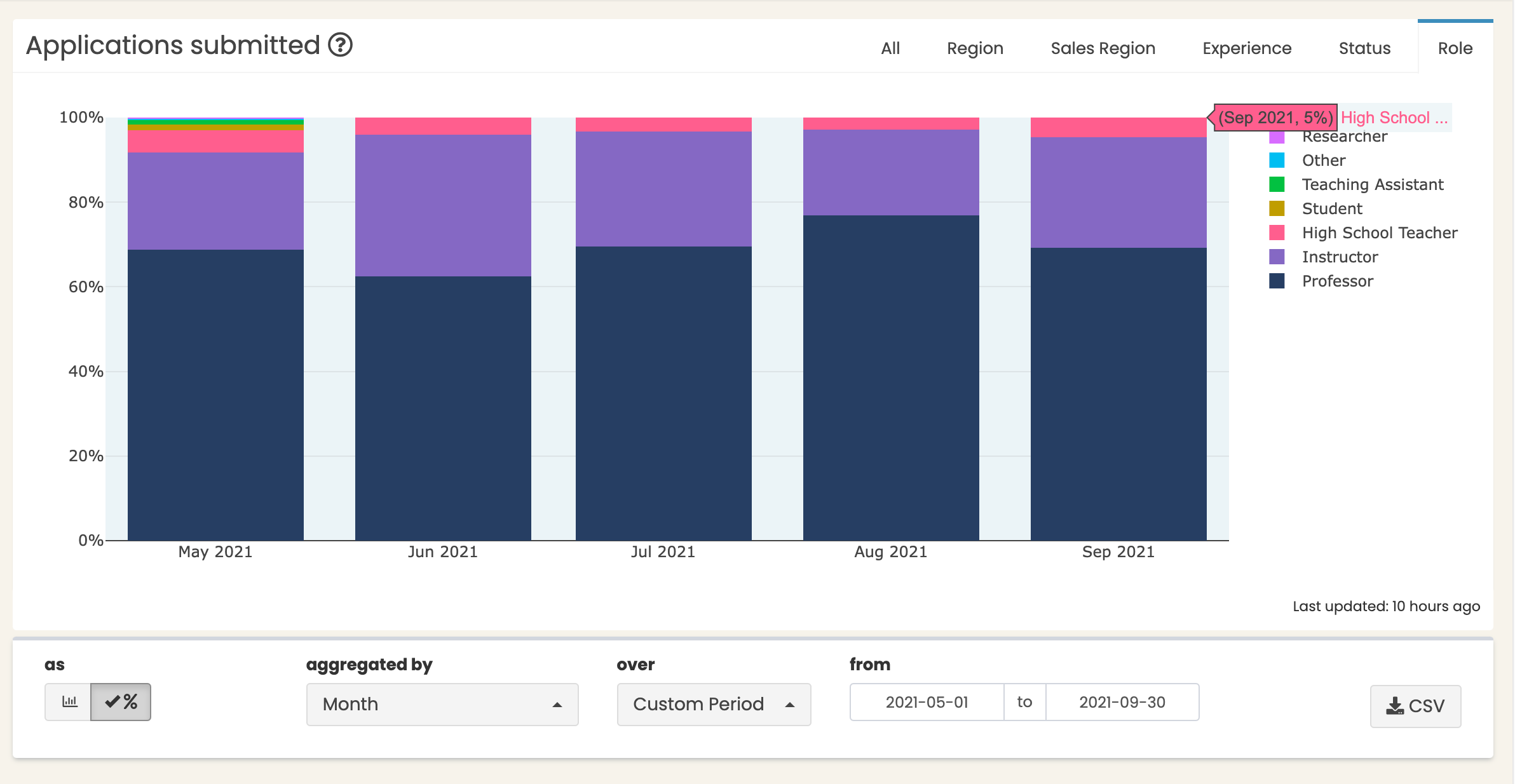 DataCamp Donates pioneers a new type of academic scholarship. It’s a future-facing model that leverages the power of a comprehensive edtech platform to benefit people for whom traditional higher education is not a feasible option. It perfectly complements the DataCamp for Classrooms program as an extension of our mission to democratize data skills for all.

In the upcoming years, we plan to scale the program, shorten registration times, increase eligibility, and improve engagement.  We also plan to invest more in our communication efforts to foster a sense of global community for all DataCamp Donates partners and learners. We are all reaching for the same goals and need to share, learn, and build together a true data-literate society.

Our comprehensive report on Education In The Time Of The Pandemic will be out in January 2023.

Q3 2022 was another record-breaking quarter for our CSR campaign! Let’s dive into the data and celebrate our partners’ successes.

Here’s a breakdown of one the best quarters ever for building data literacy amongst teachers and students worldwide, thanks to DataCamp Classrooms. We also highlight the contributions of our fantastic interns.

To celebrate International Day of Education, here is our annual report on DataCamp Classrooms for 2022. Read on to discover how we provided over 150k scholarships to teachers and students worldwide last year.