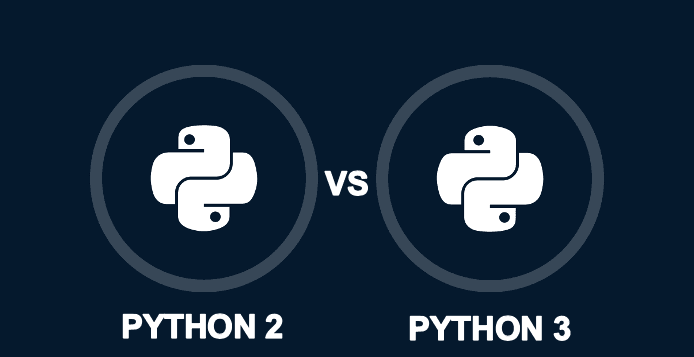 If you are considering breaking into data science, you will probably have heard about Python. Python is an open-source, general-purpose programming language with broad applicability in data science and other software domains, like web and game development, cybersecurity, and blockchain.

The popularity of Python has boomed in recent years. It ranks first in various programming language popularity indices, including the TIOBE Index and the PYPL Index. You can learn more about what Python is used for in a separate article.

Due to its simple and readable syntax, Python is often cited as one of the easiest programming languages to learn for new coders. If you are new to data science and don’t know which language to learn first, Python is one of the best options. You can start your data science journey now by taking Data Scientist with Python career track at DataCamp.

Yet, things can get a bit confusing. You may also have heard about Python 2 and 3. What is this? Isn’t there one single Python programming language? Which one should you learn? No need to stress: except for special circumstances, by now, you will always use Python 3. In any case, it’s always good to know the differences.

In the following sections, we will explain what Python 2 and 3 are, the main differences between them, and which is the most preferable to learn and use.

Python was developed in the late 1980s by Guido van Rossum and made public for the first time in 1991. After nine years of development and increased popularity, Python 2.0 was released in 2000.

But the most important change in Python 2 was to the development process itself. Python was conceived as a programming language that is easy to learn for beginners. To achieve this goal, the team responsible for developing Python –with Guido ban Rossum on top–decided to shift to a more transparent and community-backed development process.

Python 2 continued to develop over time. Successive versions added new functionality to the programming language. The last version of Python 2, released in 2010, was Python 2.7. The support for this version ended on January 1, 2020.

Python 3 is the next generation of the programming language. It was released in December 2008, along with several improvements and new features.

Python 3 was not just another version of Python 2 code after debugging. The new version drastically changed the language to address security issues and design flaws in previous versions. Python 3 came with a new syntax intended to prevent redundant or repetitive code, that is, code that does the same task in different ways. By providing a single, clear way of doing things, the ease of use and readability of Python 3 has improved considerably.

Some of the major changes in Python 3 include changing the print declaration to a built-in function, improved integer division, and improved Unicode support. The nature of these changes is such that Python 3 was incompatible with Python 2, in other words, it is backwards incompatible.

Why are there different Python versions?

Let’s see some coding examples to illustrate the differences between Python 2 and 3!

The print statement in Python 2 has been replaced by the print() function in Python 3, meaning that we have to wrap the object that we want to print in parentheses.

In Python 2, when dividing integers, the result was always an integer. In Python3, the result always includes decimals, making integer division more intuitive.

In Python 2, every single Unicode string has to be marked with a “u” prefix as it uses ASCII characters by default. By contrast, Python 3 stores strings as Unicode by default, which is more versatile than ASCII strings.

In the following table, you can find the main differences between Python 2 and 3.

Can you Convert Python 2 to 3?

Evolution is a vital feature of every programming language. Languages evolve over time to improve performance and stay relevant to users. The move from Python 2 to 3 has been the biggest change in the history of Python.

While it makes sense for companies and developers to eventually migrate their codebase to Python 3 –especially after the end of support for Python 2–, porting code from an older to a newer version can be a difficult and intimidating process. This is particularly acute in Python since many Python 2 libraries are not forward-compatible.

Fortunately, there are some resources that can help convert Python 2 code to Python3.

While this was a debating question some years ago, today, there is no doubt Python 3 is a better choice. First, Python 2 is no longer supported since 2020. So it makes sense for new projects to be written in Python 3.x. Second, since Python 2 is no longer supported, all the developments lie on the Python 3 side. The language has experienced constant improvements following every new  upgrade (the most recent version is Python 3.10.5, and there is already a beta version of Python 3.11 with important new features).

Adoption of Python 2 vs Python 3 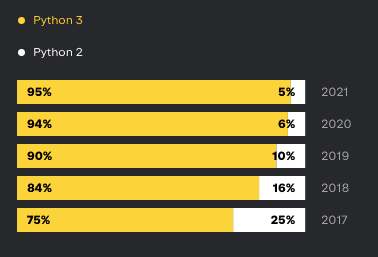 Which Python version to use?

Python 3 is the best version of Python nowadays.  Going for it is the safest choice, especially for novel programmers. Since its stop of support, Python 2 is rapidly running out of steam, and more and more companies are migrating their code to Python 3. Given its growing demand in many software domains, widespread usage, and huge collection of community-backed libraries, it makes sense to learn Python 3.

However, it’s important to note that in certain circumstances, you will still need to use Python 2. First, many companies still have legacy codebases written in Python 2 that are difficult to port to Python 3. If that’s the case for the company or project you are working on, you will need to learn Python 2. Second, there are some software domains, such as DevOps, where Python 2 is still required.

In any case, if you are considering starting a new career in data science, Python 3 is the smart choice. With DataCamp, everything is set for you. Check out our Python course and tracks, and start your data journey today!

Which version of Python is more popular?

Python 3 is the indisputable winner, with massive adoption compared to Python 2.

Is Python a suitable language for data science?

The most popular programming languages for data science are Python and R. DataCamp has a large catalog of Python courses that will help you get started

Yes! in almost all tests. Python 3 is usually faster than Python 2.

What is the latest version of Python 2?

Python 2.7. In 2020, the support and maintenance of this version was ended.

Why upgrade to Python 3?

There are some resources  you can use to update your code to Python 3, such as 2to3, Python-Future, and Six.

Can I install both Python 2 and 3?

Yes. You can do it by maintaining separate virtual environments for Python 2 and 3.

Introduction to Data Science in Python

Introduction to Statistics in Python