Nearly every data science project involves studying correlations among variables. A correlation is the statistical summary of the relationship between two sets of variables. It is a core part of data exploratory analysis, and is a critical aspect of numerous advanced machine learning techniques. If you are considering breaking into data science, sooner or later in your data science journey you will need to learn correlation.

In this tutorial, we will explain what correlation is and its relevance when conducting data science projects. We will also have a look at the different correlation coefficients we can use to measure the strength and direction of the relationship between variables. We will use Python code to provide practical examples of how to measure and visualize correlations in a simple manner.

Studying correlation can be very useful in many data science tasks. First, it is a key component in data exploratory analysis; the initial study we conduct in our data to see how it looks, to summarize its main characteristics, and to discover partners and anomalies.

Second, correlations have many real-world applications. They can help us answer questions, such as whether there is a link between democracy and economic growth, or whether the use of cars correlates to the level of air pollution.

Finally, the study of correlation is critical in the field of machine learning. For example, some algorithms will not work properly if two or more variables are closely related, usually known as multicollinearity. Correlation is also the basis of Principal Component Analysis, a linear dimensionality reduction technique which is very useful in machine learning projects.

There are different types of correlation: 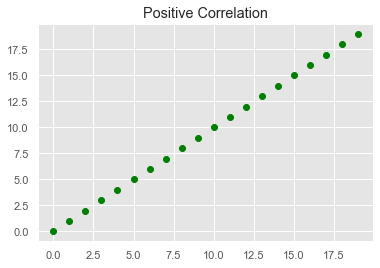 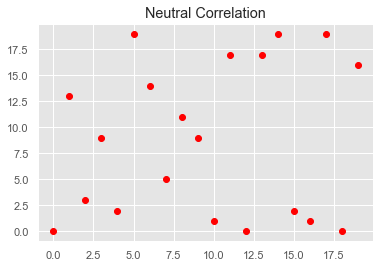 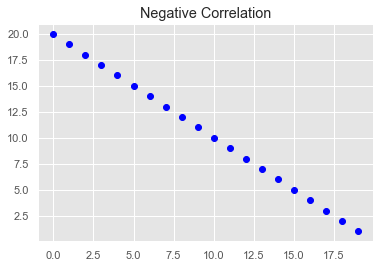 However, sometimes we will need not only to visualize correlation, but also to measure how strong the correlation is. This is where correlation coefficients come into play.

A correlation coefficient is a statistical summary that measures the strength and direction to which two variables are associated with one another.

One of the advantages of correlation coefficients is that they estimate the correlation between two variables in a standardized way, meaning that the value of the coefficient will always be on the same scale, ranging from -1.0 to 1.0.

The Pearson's correlation coefficient (r) is a score that measures the strength of a linear relationship between two variables. It is calculated by dividing the covariance of variables X and Y by the product of the standard deviation of each variable, as shown in the following formula:

The coefficient is based on two assumptions. First, it assumes that the variables follow a normal or gaussian distribution. If the data is not normally distributed, then other coefficients may be more reliable.

Second, it assumes that there is a linear relationship between the two variables, meaning that the changes in the data can be modelled using a linear function (i.e. their values increase or decrease simultaneously at a constant rate). If the relationship between the two variables is closer to some straight line, then their (linear) correlation is stronger and the absolute value of Pearson's correlation coefficient is higher. For example, in the next image, all the data points can be perfectly modeled using a straight line, resulting in a correlation coefficient equal to 1.0. 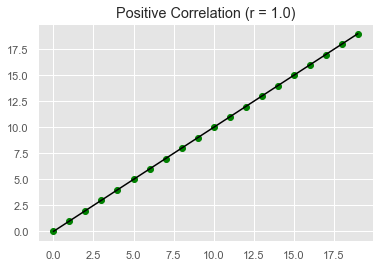 Interpreting the coefficient becomes more difficult when its value is approaching zero. Several rules of thumb have been proposed to interpret the values of the coefficient. One of the most popular was formulated by Dennis E. Hinkle and his co-authors in their book Applied Statistics for the Behavioral Sciences:

It is important to highlight that a Pearson's correlation coefficient close to 0.0 only indicates that there is no linear relationship between the variables. But it could happen that there is a strong, non-linear relationship instead. If a relationship between two variables is nonlinear, the rate of increase or decrease may change as one variable changes, drawing a curve-like pattern in the data. Such a trend could be better modeled by a nonlinear function, such as a quadratic or cubic function.

For example, the following image shows how the happiness level of workers varies depending on the hours worked per week. We can see that as the number of hours increases, happiness also goes up, but it starts declining beyond 35 hours approximately. The linear model (red line) is not well-suited to fit the data. Instead, a quadratic model (blue line), also known as a polynomial model with a degree of 2, seems a much better candidate to fit the curvy shape of the data. When the relationship is nonlinear, correlation generally underestimates how strong it is. This is the case in our example, where the coefficient is equal to 0.127, telling little about the nonlinear relationship between happiness and hours worked. 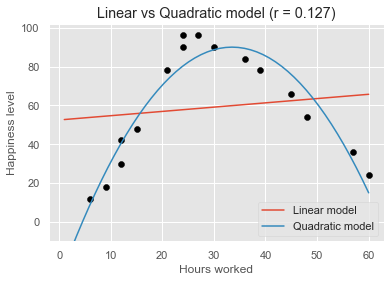 The biggest limitation of Pearson's correlation coefficient is that it assumes a linear relationship between the two variables. However, more often than not, variables are associated with a nonlinear relationship. Also, the data at hand may have a non-Gaussian distribution. To address this shortcoming, statisticians have proposed other types of estimates, namely the Spearman's rho and Kendall's tau correlation coefficients.

Instead of calculating the coefficients using the covariance and standard deviations of the variables, they are based on the relative rank of the values of the variables. This particularity makes them robust estimates against extreme values, and suitable to handle certain types of nonlinearities.

However, data scientists can generally stick to Pearson's correlation coefficient. The appeal of rank-based estimates is mostly for smaller data sets and specific hypothesis tests.

There are various Python packages that can help us measure correlation. In this section, we will focus on the correlation functions available in three well-known packages: SciPy, NumPy, and pandas.

To try the functions, imagine we want to study the relationship between work experience (measured in years) and salary (measured in dollars) in a small yet successful startup comprising 16 workers.

As we can see in the next graph, there is a strong positive correlation between the two variables, meaning that employees with more experience tend to have higher salaries. 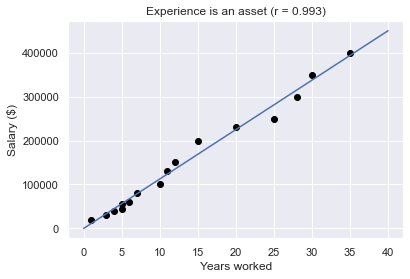 We could calculate Spearman's and Kendall's coefficient in the same fashion:

NumPy is a popular package that offers an extensive collection of advanced mathematical functions, including np.corrcoef() that returns a matrix of Pearson's correlation coefficients:

Finally, we will usually need to calculate correlation for our variables stored in pandas DataFrames. Imagine we have our DataFrame with information about the workers of the startup: 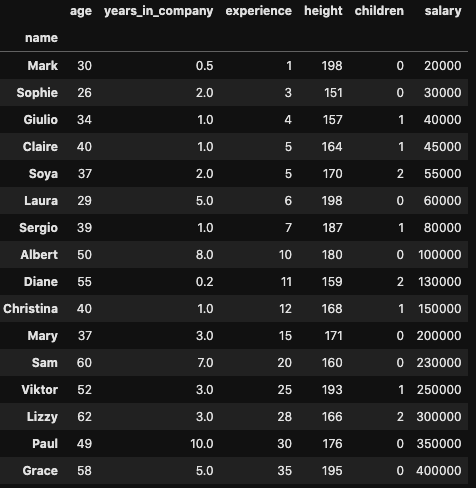 If we wanted to calculate the correlation between two columns, we could use the pandas method .corr(), as follows:

The .corr() includes the parameter "method", which can be used to calculate the three correlation coefficients. By default, it calculated Pearson's.

The correlation matrix can be very big and difficult to interpret if our DataFrame has many columns. To extract the insights of our matrix in a more effective way, we could use a heatmap; a data visualization technique where each value is represented by a color, according to its intensity in a given scale. The fastest way to create a heatmap is by using the function heatmap(), available in the seaborn library: 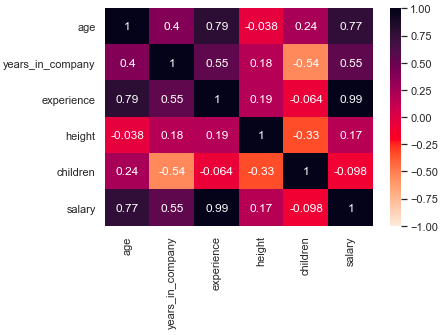 Correlation does not imply causation

We could not finish this tutorial without mentioning an important remark: correlation does not imply causation.

Finally, another reason to take correlation with caution is the world we live in is complex. A stronger correlation between two variables can easily lead us to conclude that one caused the other. The belief that a given effect has only one cause is called monocausality, but this is rarely the case. Several variables can be behind a certain effect. Thus, in order to consider causality, we first need to assume all the elements of a system and evaluate them not only quantitatively (i.e. through statistical methods) but also qualitatively.

For these reasons, before making any conclusion about relationships in our data, it is important to conduct a more thorough and detailed analysis to identify possible spurious correlations.

We hope you enjoyed this tutorial. Correlation is an important topic that every aspiring data scientist should learn. At DataCamp, we have a wide number of courses of statistics where we deal with correlation, causation, and other key statistical concepts, both with Python and R.

Once you have a solid understanding, we recommend you try DataCamp Workspace, an online environment to write code and apply what you have learned.