Linear regression is a type of linear model that is considered the most basic and commonly used predictive algorithm. This can not be dissociated from its simple, yet effective architecture. A linear model assumes a linear relationship between input variable(s) 𝑥 and an output variable y. The equation for a linear model looks like this:

In this equation 1.1, we show a linear model with n number of features. w is considered the coefficient (or weights) assigned to each feature - an indicator of their significance to the outcome y. For example, we assume that temperature is a larger driver of ice cream sales than whether it's a public holiday. The weight assigned to temperature in our linear model will be larger than the public holiday variable.

Introduction to Regression with statsmodels in Python

Intermediate Regression with statsmodels in Python

When it comes to training models, there are two major problems one can encounter: overfitting and underfitting.

Particularly, regularization is implemented to avoid overfitting of the data, especially when there is a large variance between train and test set performances. With regularization, the number of features used in training is kept constant, yet the magnitude of the coefficients (w) as seen in equation 1.1, is reduced.

Consider the image of coefficients below to predict house prices. While there are quite a number of predictors, RM and RAD have the largest coefficients. The implication of this will be that housing prices will be driven more significantly by these two features leading to overfitting, where generalizable patterns have not been learned. 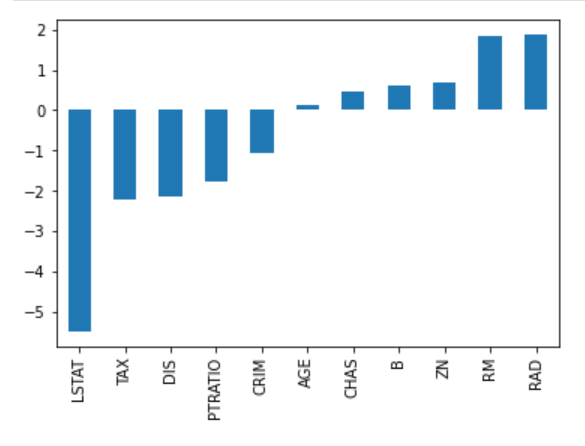 There are different ways of reducing model complexity and preventing overfitting in linear models. This includes ridge and lasso regression models.

In this shrinkage technique, the coefficients determined in the linear model from equation 1.1. above are shrunk towards the central point as the mean by introducing a penalization factor called the alpha α (or sometimes lamda) values.

Alpha (α) is the penalty term that denotes the amount of shrinkage (or constraint) that will be implemented in the equation. With alpha set to zero, you will find that this is the equivalent of the linear regression model from equation 1.2, and a larger value penalizes the optimization function. Therefore, lasso regression shrinks the coefficients and helps to reduce the model complexity and multi-collinearity.

Alpha (α) can be any real-valued number between zero and infinity; the larger the value, the more aggressive the penalization is.

Due to the fact that coefficients will be shrunk towards a mean of zero, less important features in a dataset are eliminated when penalized. The shrinkage of these coefficients based on the alpha value provided leads to some form of automatic feature selection, as input variables are removed in an effective approach.

Ridge regression is also referred to as L2 Regularization.

Why Lasso can be Used for Model Selection, but not Ridge Regression 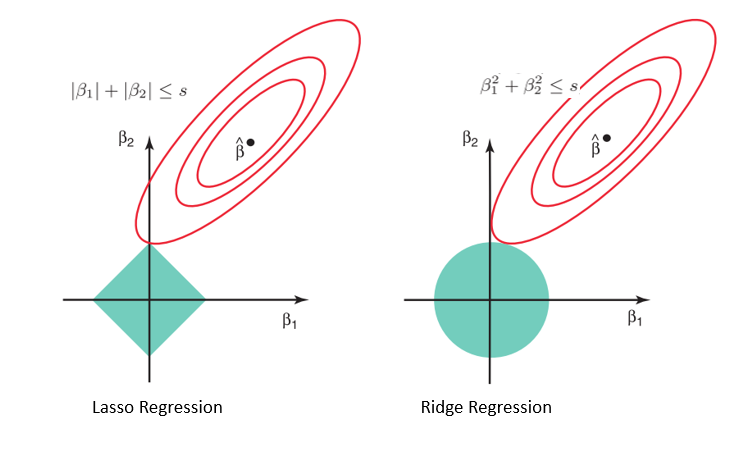 Considering the geometry of both the lasso (left) and ridge (right) models, the elliptical contours (red circles) are the cost functions for each. Relaxing the constraints introduced by the penalty factor leads to an increase in the constrained region (diamond, circle). Doing this continually, we will hit the center of the ellipse, where the results of both lasso and ridge models are similar to a linear regression model.

However, both methods determine coefficients by finding the first point where the elliptical contours hit the region of constraints. Since lasso regression takes a diamond shape in the plot for the constrained region, each time the elliptical regions intersect with these corners, at least one of the coefficients becomes zero. This is impossible in the ridge regression model as it forms a circular shape and therefore values can be shrunk close to zero, but never equal to zero.

For this implementation, we will use the Boston housing dataset found in Sklearn. What we intend to see is: 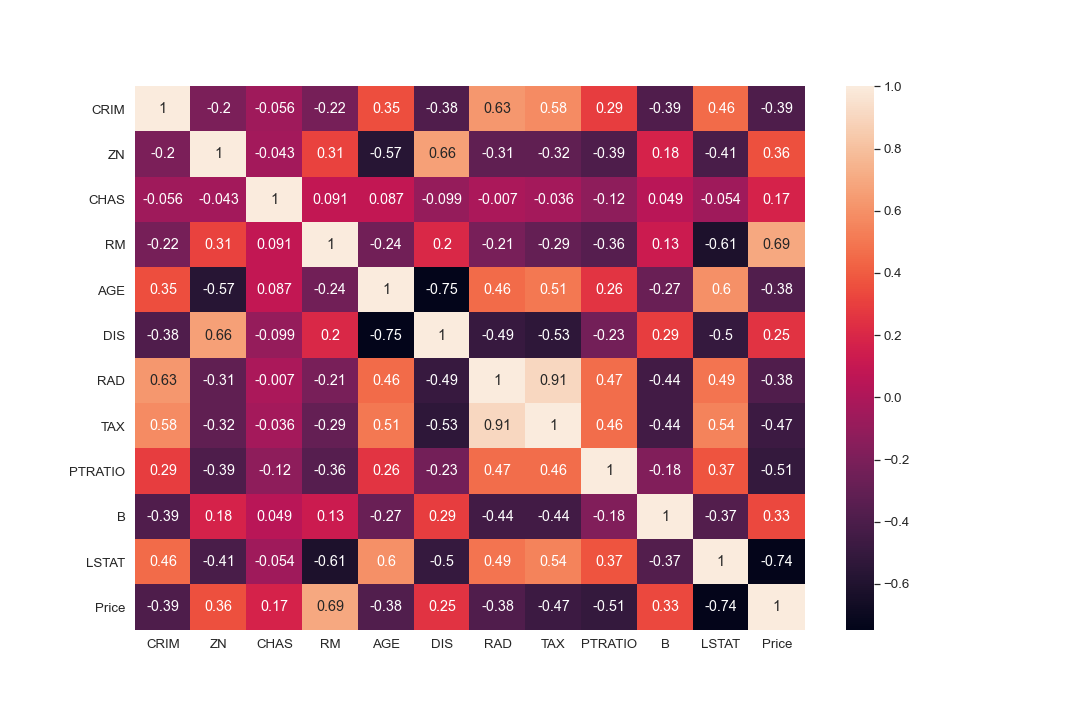 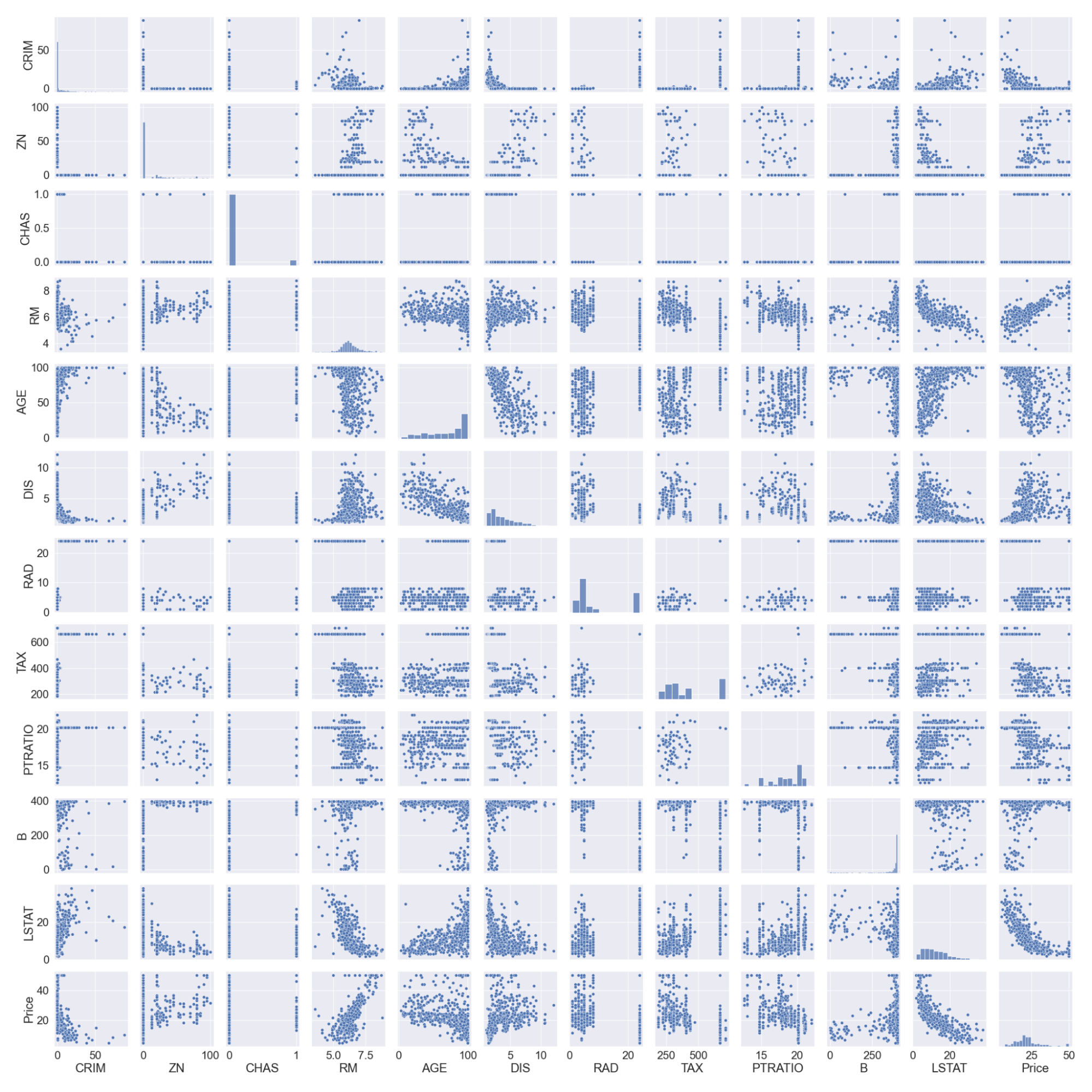 We will build a linear and a ridge regression model and then compare the coefficients in a plot. The score of the train and test sets will also help us evaluate how well the model performs.

Using an alpha value of 10, the evaluation of the model, the train, and test data indicate better performance on the ridge model than on the linear regression model.

We can also plot the coefficients for both the linear and ridge models. 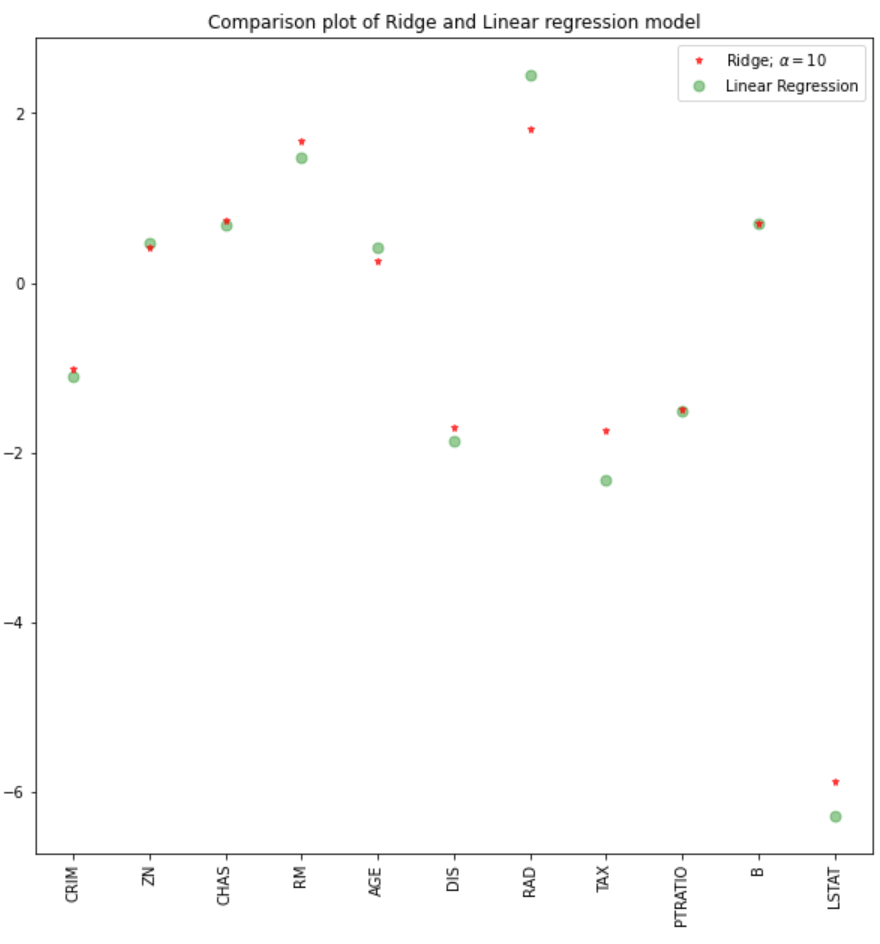 We can visualize the coefficients too. 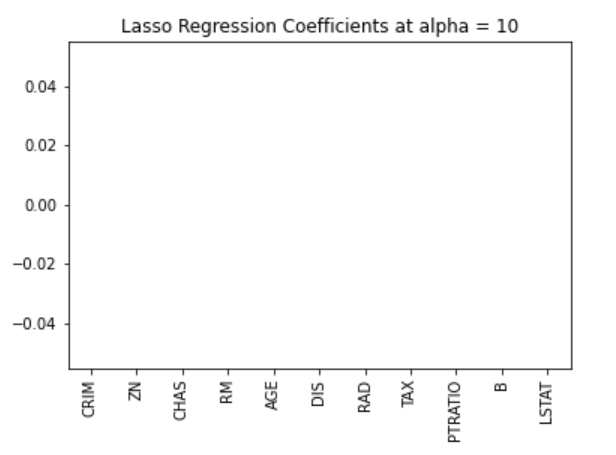 Earlier on, we established that the lasso model can inert to zero due to the diamond shape of the constraint region. In this case, using an alpha value of 10 over penalizes the model and shrinks all the values to zero. We can see this effectively by visualizing the coefficients of the model as shown in the figure above.

The model will be trained on different alpha values that I have specified in the LassoCV function. We can observe a better performance of the model, removing the tedious effort of manually changing alpha values.

We can compare the coefficients from the lasso model with the rest of the models (linear and ridge). 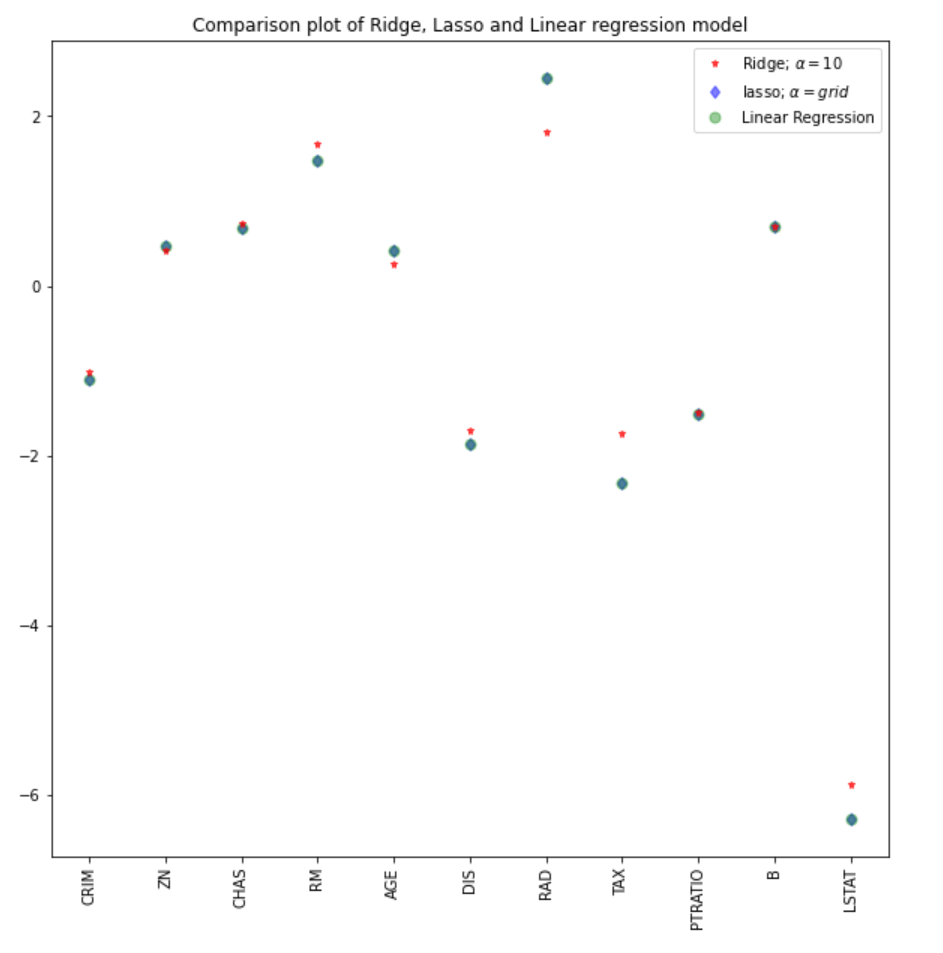 Note: A similar approach could be employed for the ridge regression model, which could lead to better results. In the sklearn package, the function RidgeCV performs similarly.

Click here to learn about other kinds of regression you can implement in Python.

We have seen an implementation of ridge and lasso regression models and the theoretical and mathematical concepts behind these techniques. Some of the key takeaways from this tutorial include:

You can find a more robust and complete notebook for the python implementation here, or do a deep dive into regressions with our Introduction to Regression in Python course.