A good decision-making process finds a balance between decisiveness and due diligence, so conveying information quickly is highly valued in all kinds of businesses. This concept is at the heart of data visualization; often, a single graphic or chart can effortlessly show and explain what would otherwise have been thousands of numbers and words. You can create such charts using Business Intelligence tools such as Tableau and Microsoft Power BI.

In this article, we look at Power BI vs Tableau, exploring their similarities and differences, as well as their pros and cons. After reading, you should have an idea of which is right for your needs.

A chart in Power BI 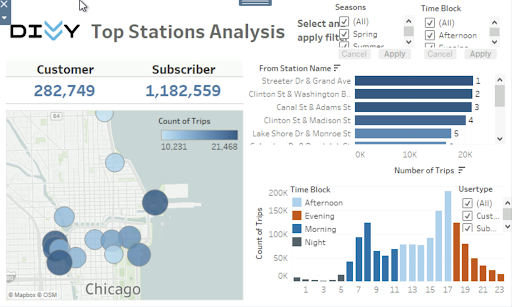 A Background on Business Intelligence Tools

Business intelligence is a practice that pre-dates the digital age. The first usage of the term dates back to the 1860s, referring to an American banker who gathered and analyzed data to gain actionable insights and get ahead of the competition.

Things have come a long way since then, with ever-increasing amounts of data being accessible for modern businesses. As a result of such an influx of data, various organizations have produced software to help businesses make sense of the vast swathes of information.

Tableau first launched in 2004, providing a drag-and-drop way for users to create interactive visuals and dashboards. In reality, Tableau has a variety of products that help businesses store, analyze, and visualize data.

Microsoft Power BI arrived on the scene several years later, first launching to the public in 2011. Again, the focus was to create an easy-to-use interface to enable non-programmers to organize and visualize data. Like Tableau, Power BI comprises several different components. You can find out more about what you can do with Tableau and what you can do with Power BI in separate articles.

Let’s take a look at some of the ways Tableau and Power BI are similar:

According to data from Gartner, Power BI and Tableau are the first- and second-most popular business intelligence tools on the market. With an average 4.4-star rating from over 2500 reviews, Power BI slightly outranks Tableau, which has 4.3 stars out of 5 from over 2100 ratings. 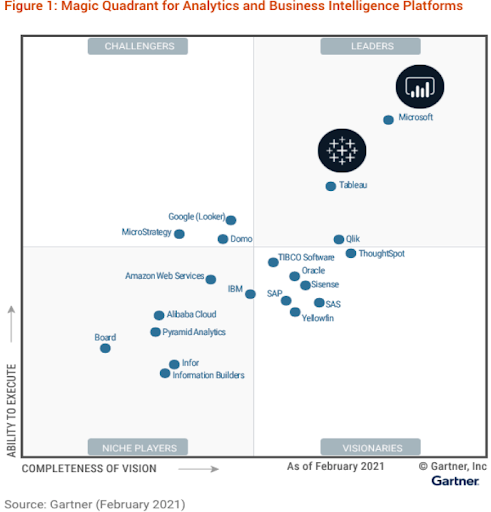 They produce a variety of different visualizations

Both Tableau and Power BI can help you showcase your data in a variety of different ways. You have options for visualizations, including bar and line charts, treemaps, and geographical maps. On both platforms, you can interact with these visualizations, such as by hovering over them to get more information and applying filters, and you can also combine them to create interactive dashboards.

They can connect to a variety of data sources

It’s one thing visualizing the data you have, but it’s important to have an array of inputs. After all, businesses tend to gather data from multiple channels. When comparing Tableau and Power BI, we see that both can connect to a wide range of sources. These include MS Excel, CSV, and JSON, and the paid version of both platforms gives you access to 50+ additional data connectors such as Google Bigquery, Amazon Redsift, and Salesforce. Visualizations are updated if the underlying data changes.

They’re both code-free and user-friendly

Part of the appeal of using business intelligence tools is that everything you need is at your fingertips. This makes both Tableau and Power BI ideal tools to learn if you are new to data analytics. If you are a business analyst, they are two of the main data visualization tools you will need to work with data. You can learn to become a data analyst with Power BI or Tableau.

Of course, there are other tools you can work with, as the graph below demonstrates. SQL, R, and Python are also valuable tools, and adding one or more to your skill set is extremely valuable.

Thanks to recent updates, Tableau and Power BI have become increasingly similar.

For example, Power BI used to excel in data preparation, as users have always been able to model, clean, and add calculated columns to datasets through Power Query. However, Tableau has recently made its own inroads with the launch of Tableau Prep. 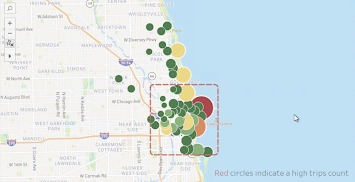 When comparing, Tableau and Power BI, there are a few points of difference that you should consider, and if you are thinking about using them within your business or in your career, these can make the choice easier.

This can make the choice of the two platforms a whole lot easier. If you will mostly be using a Mac for your work, Tableau would be the better choice, as you can’t use Power BI on a Mac.

Tableau offers a wider range of options designed for specific professions. You can find out more about these on the Tableau website, but essentially, there are associate, specialist, and analyst levels.

Power BI has one certification that covers all the main functionalities of the platform. There is the PL-300: Microsoft Power BI Data Analyst exam, which cost $165.

As Power BI was developed by Microsoft, it will be easier to integrate into your workspace if you use Office software. Likewise, Tableau was recently acquired by Salesforce so they are worth considering thanks to their native integration. However, both are capable of connecting to tools like Excel and Salesforce, so this is more a question of which would run more smoothly for your setup.

When it comes to using each with different programming languages, there are further differences:

It’s worth looking in more detail at the prices of these two business intelligence tools, as this is where perhaps the most differences exist between Power BI and Tableau.

As a quick reference, we’ve included these details in the table below:

The licenses above are designed for individual data analysts who are creating dashboards. If your company is interested in rolling out Tableau or Power BI, you will also need to consider viewer licenses:

However, Tableau tends to perform better than Power BI when it comes to significantly large data sets. Power BI is faster when data sets are more limited. Again, it depends on what you’re going to be using the tools for as to which is most suitable for you.

There is very little to separate these two when it comes to the UI and UX, only personal preference. Both are designed to be intuitive and easy to use, giving users the chance to explore their data in a way that feels familiar. You’ll be able to pick up either with similar levels of ease.

Which is better, Power BI or Tableau?

You’re probably wondering which comes up top in the Tableau vs Power BI comparison. However, in reality, the best choice is really up to the individual. It depends on your needs and what you’ll be using it for, as well as what’s required of your business.

If you are looking to upskill and enhance your value to potential employers, having a working knowledge of either Power BI or Tableau is great. Additionally, both are available to learn here on DataCamp, and once you learn how to use one, learning how to use the other is simple. You can start with an introduction to Power BI or introduction to Tableau and progress from there.

Which should I choose?

So, should you choose Power BI or Tableau? There is certainly a lot of overlap between the two, and ultimately both are useful tools to have. For some users, choosing to learn both can be the best option. However, for those who wish to decide between one or the other, there are differences in cost and accessibility that must be considered.

Think about the system you’ll be using it on, the amount of data you’ll be working with, whether you need to use programming languages with your work, and whether you want to become certified.

DataCamp offers a range of courses in both Tableau and Power BI. Our courses enable you to practice with each tool’s interface without any installation involved and cover functions such as connecting data and building dashboards.

If you’re looking for a handy guide to the differences between these two fantastic tools, we’ve prepared an infographic that deals with the key comparison points.

Want a career in data? Discover our Data Analyst in Microsoft Power BI career track and you'll be job ready in no time.

Which is better, Power BI vs Tableau?

The answer to this depends entirely on your personal or business needs. Both of these tools can create useful data insights and visualizations, and each has a range of features that make them suited to different environments.

Is Power BI or Tableau easier?

There isn’t much between them, but a lot of people consider Power BI to be marginally more beginner-friendly than Tableau. If you’re not a data analyst, Tableau may have a slightly steeper learning curve. However, both are intuitive and have excellent UIs.

Should I learn Power BI or Tableau?

Both are strong options to learn. If you’re totally new to the concept of business intelligence, Power BI might be a gentler introduction. However, if you want to build custom dashboards, Tableau is as good a choice.

No, neither Tableau nor Power BI requires coding skills. However, if you want to get the most out of your data and visualizations, then it’s always useful to have knowledge of R Programming, Python and SQL.

How long will it take to learn Tableau or Power BI?

You can get the fundamentals of both tools in around 3-4 hours with one of our introductory courses. However, to gain fluency, it can take considerably longer, usually a few months. Our Data Analyst in Tableau track takes around 42 hours to complete, while our Data Analyst in Power BI takes roughly 51 hours.

Beginner
3 hours
20,949
Power BI is a powerful data visualization tool that can be used in reports and dashboards.
See Details
Start Course

If you are hunting for your first data analyst job or looking to move up in your career, use this guide to help prepare for your interview, practice some data analyst interview questions, and land your dream job.

In this article, we discuss what predictive analytics is, explore some examples of how it is used, and look at how it works.

Ginger Grant talks about Power BI, and the common mistakes organizations make when implementing Power BI, advanced use cases, and much more.