This conceptual blog aims to cover Transformers, one of the most powerful models ever created in Natural Language Processing. After explaining their benefits compared to recurrent neural networks, we will build your understanding of Transformers. Then, we will walk you through some real-world case scenarios using Huggingface transformers.

Before diving into the core concept of transformers, let’s briefly understand what recurrent models are and their limitations.

Recurrent networks employ the encoder-decoder architecture, and we mainly use them when dealing with tasks where both the input and outputs are sequences in some defined ordering. Some of the greatest applications of recurrent networks are machine translation and time series data modeling.

Let’s consider translating the following French sentence into English. The input transmitted to the encoder is the original French sentence, and the translated output is generated by the decoder.

A simple illustration of the recurrent network for language translation

Wouldn't it be great to have a model that combines the benefits of recurrent networks and make parallel computation possible?

Here is where transformers come in handy.

What are transformers in NLP?

Transformers is the new simple yet powerful neural network architecture introduced by Google Brain in 2017 with their famous research paper “Attention is all you need.” It is based on the attention mechanism instead of the sequential computation as we might observe in recurrent networks.

What are the main components of transformers?

Similar to recurrent networks, transformers also have two main blocs: encoder and decoder, each one having a self-attention mechanism. The first version of transformers had RNN and LSTM encoder-decoder architecture, which have been changed later into self-attention and feed-forward networks.

The following section provides a general overview of the main components of each block of transformers. 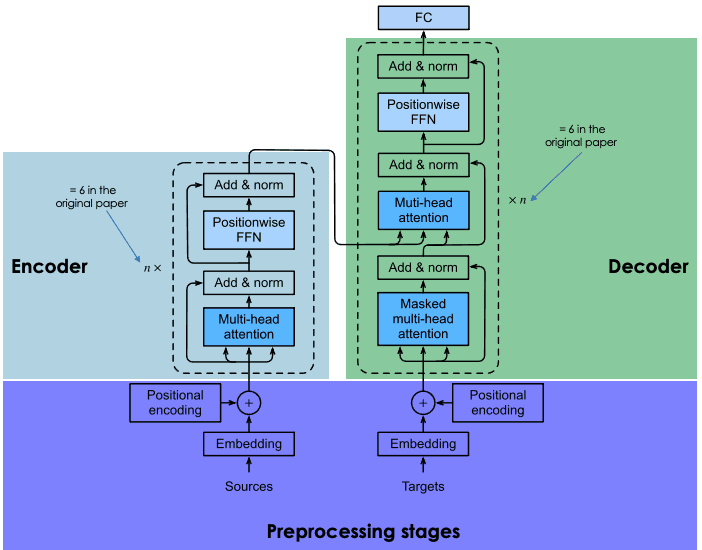 Embedding of the input data

Before generating the embeddings of the input data, we start by performing the tokenization, then create the embedding of each individual word without paying attention to their relationship in the sentence.

The tokenization task discards any notion of relations that existed in the input sentence. The positional encoding tries to create the original cyclic nature by generating a context vector for each word.

At the end of the previous step, we get for each word two vectors: (1) the embedding and (2) its context vector. These vectors are added to create a single vector for each word, which is then transmitted to the encoder.

As mentioned previously, we lost all notion of a relationship. The goal of the attention layer is to capture the contextual relationships existing between different words in the input sentence. This step ends up generating an attention vector for each word.

At this stage, a feed-forward neural network is applied to every attention vector to transform them into a format that is expected by the next multi-head attention layer in the decoder.

The decoder comes into the equation during the training of the network, and it receives two main inputs: (1) the attention vectors of the input sentence we want to translate and (2) the translated target sentences in English.

So, what is the masked multi-head attention layer responsible for?

During the generation of the next English word, the network is allowed to use all the words from the French word. However, when dealing with a given word in the target sequence (English translation), the network only has to access the previous words because making the next ones available will lead the network to “cheat” and not make any effort to learn properly. Here is where the masked multi-head attention layer has all its benefits. It masks those next words by transforming them into zeros so that they can’t be used by the attention network.

The result of the masked multi-head attention layer passes through the rest of the layers in order to predict the next word by generating a probability score.

This architecture was successful because of the following reasons:

Training deep neural networks such as transformers from scratch is not an easy task, and might present the following challenges:

Using transfer learning can have many benefits, such as reducing the training time, speeding up the training process of new models, and decreasing project delivery time.

Imagine building a model from scratch to translate Mandingo language into Wolof, which are both low resources languages. Gathering data related to those languages is costly. Instead of going through all these challenges, one can re-use pre-trained deep-neural networks as the starting point for training the new model.

Such models have been trained on a huge corpus of data, made available by someone else (moral person, organization, etc.), and evaluated to work very well on language translation tasks such as French to English.

If you are new to NLP, this Introduction to Natural Language Processing in Python course can provide you with the fundamental skills to perform and solve real-world problems.

But what do you mean by re-use of deep-neural networks?

The introduction of Transformers has led to the development of state-of-the-art transfer learning models such as:

An introduction to Hugging Face Transformers

Hugging Face is an AI community and Machine Learning platform created in 2016 by Julien Chaumond, Clément Delangue, and Thomas Wolf. It aims to democratize NLP by providing Data Scientists, AI practitioners, and Engineers immediate access to over 20,000 pre-trained models based on the state-of-the-art transformer architecture. These models can be applied to:

These courses are a great introduction to using Pytorch and Tensorflow for respectively building deep convolutional neural networks. Other components of the Hugging Face Transformers are the Pipelines.

What are Pipelines in Transformers?

The pipeline() method has the following structure:

Now that you have a better understanding of Transformers, and the Hugging Face platform, we will walk you through the following real-world scenarios: language translation, sequence classification with zero-shot classification, sentiment analysis, and question answering.

Information about the data sets

This dataset is available on Datacamp’s Dataset is enriched by Facebook and was created to predict the popularity of an article before its publication. The analysis will be based on the description column. To illustrate our examples, we will be using only three examples from the data.

Below is a brief description of the data. It has 14 columns and 1428 rows. 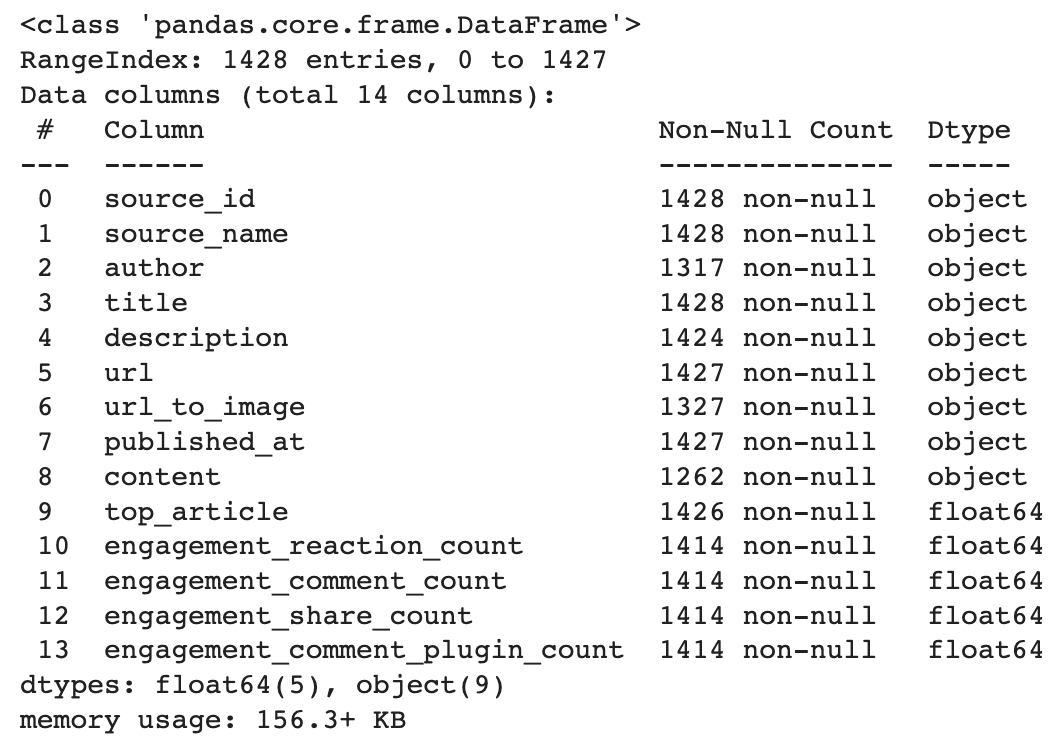 MariamMT is an efficient Machine Translation framework. It uses the MarianNMT engine under the hood, which is purely developed in C++ by Microsoft and many academic institutions such as the University of Edinburgh, and Adam Mickiewicz University in Poznań. The same engine is currently behind the Microsoft Translator service.

The NLP group from the University of Helsinki open-sourced multiple translation models on Hugging Face Transformers and they are all in the following format Helsinki-NLP/opus-mt-{src}-{tgt}where {src} and {tgt}correspond respectively to the source and target languages.

So, in our case, the source language is English (en) and the target language is French (fr)

MarianMT is one of those models previously trained using Marian on parallel data collected at Opus.

Most of the time, training a Machine Learning model requires all the candidate labels/targets to be known beforehand, meaning that if your training labels are science, politics, or education, you will not be able to predict the healthcare label unless you retrain your model, taking into consideration that label and the corresponding input data.

This powerful approach makes it possible to predict the target of a text in about 15 languages without having seen any of the candidate labels. We can use this model by simply loading it from the hub.

The goal here is to try to classify the category of each of the previous descriptions, whether it is tech, politics, security, or finance. 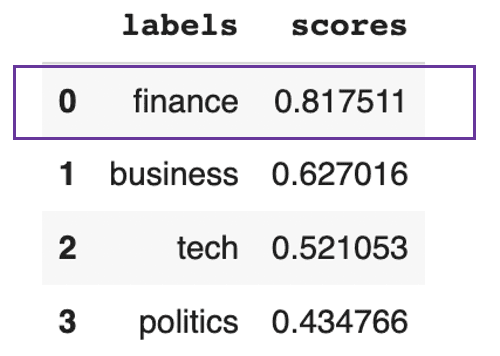 Text predicted to be mainly about finance

This previous result shows that the text is overall about finance at 81%.

For the last description, we get the following result: 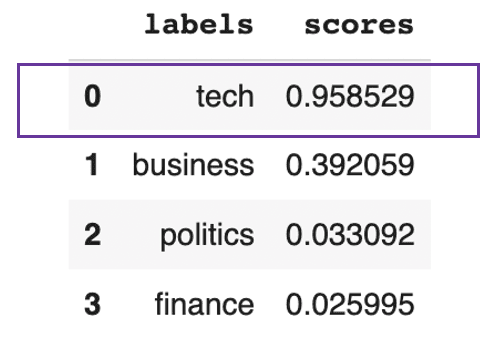 Text predicted to be mainly about tech

This previous result shows that the text is overall about tech at 95%.

Imagine dealing with a report much longer than the one about Apple. And, all you are interested in is the date of the event being mentioned. Instead of reading the whole report to find the key information, we can use a question-answering model from Hugging Face that will provide the answer we are interested in.

This can be done by providing the model with proper context (Apple’s report)and the question we are interested in finding the answer to.

The model answered that Apple’s event is on September 10th with high confidence of 97%.

In this article, we’ve covered the evolution of natural language technology from recurrent networks to transformers and how Hugging Face has democratized the use of NLP through its platform.

If you are still hesitant about using transformers, we believe it is time to give them a try and add value to your business cases.

What is a Hugging Face transformer?

Hugging Face transformers is a platform that provides the community with APIs to access and use state-of-the-art pre-trained models available from the Hugging Face hub.

What is a pre-trained transformer?

A pre-trained transformer is a transformer model that has been trained and validated by someone (a moral person or an industry) and that we can use as a starting point for a similar task.

Is Hugging Face free to use?

Hugging Face provides both community and organization versions. The community version includes free, which has limitations, and the pro version, which costs $9 per month. Organizations, on the other hand, include Lab and enterprise solutions, which are not free of charge.

Which framework is used on Hugging Face?

Hugging Face provides APIs for almost 31 libraries. Most of them are deep learning, such as  Pytorch, Tensorflow, Jax, ONNX, fastai, Stable-Baseline 3, etc.

Which programming language is used on Hugging Face?

Some of the pre-trained models have been trained using multilingual denoising tasks in Javascript, Python, Rust, and Bash/Shell. This Python Natural Language Processing course can help you get the relevant skills to successfully perform common text cleaning tasks