How to Make a Histogram with Basic R

Tutorial for new R users whom need an accessible and easy-to-understand resource on how to create their own histogram with basic R. 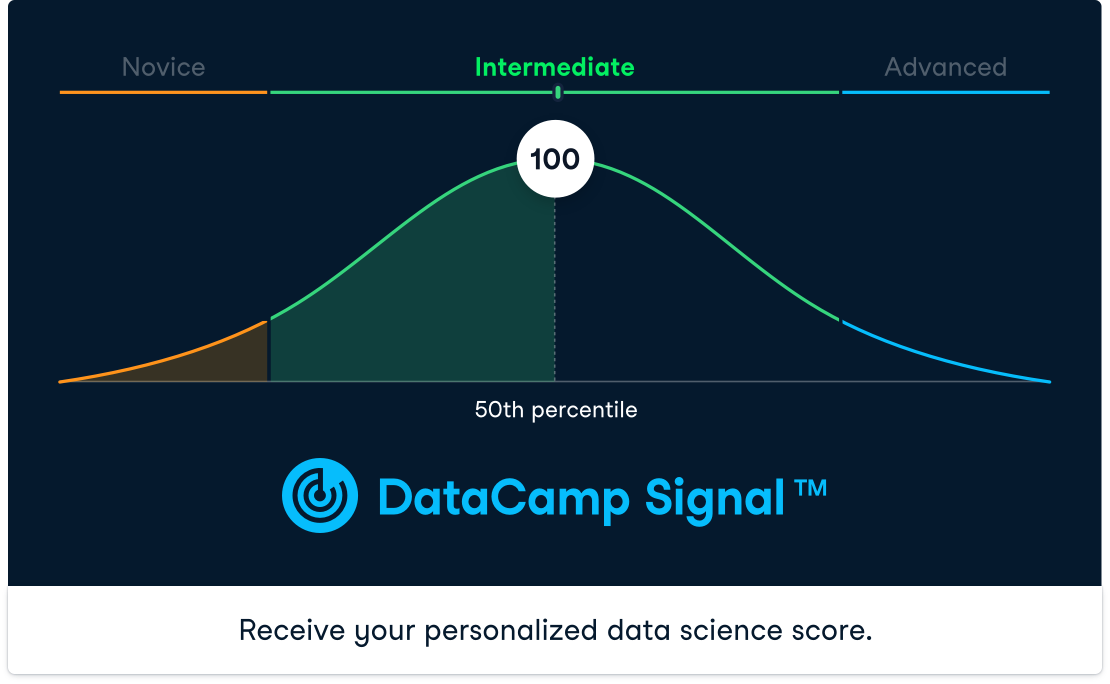 This is the first post in an R tutorial series that covers the basics of how you can create your own histograms in R. Three options will be explored: basic R commands, ggplot2 and ggvis. These posts are aimed at beginning and intermediate R users who need an accessible and easy-to-understand resource.

Making histogram with basic R commands will be the topic of this post; You will cover the following topics in this tutorial:


Want to learn more? Discover the R courses at DataCamp.

What Is A Histogram?

A histogram is a visual representation of the distribution of a dataset. As such, the shape of a histogram is its most evident and informative characteristic: it allows you to easily see where a relatively large amount of the data is situated and where there is very little data to be found (Verzani 2004). In other words, you can see where the middle is in your data distribution, how close the data lie around this middle and where possible outliers are to be found. Because of all this, histograms are a great way to get to know your data!

But what does that specific shape of a histogram exactly look like?

In short, the histogram consists of an x-axis, a y-axis and various bars of different heights. The y-axis shows how frequently the values on the x-axis occur in the data, while the bars group ranges of values or continuous categories on the x-axis. The latter explains why histograms don’t have gaps between the bars.

Note that the bars of histograms are often called “bins” ; This tutorial will also use that name.

How to Make a Histogram with Basic R

Since histograms require some data to be plotted in the first place, you do well importing a dataset or using one that is built into R.

This tutorial makes use of two datasets: the built-in R dataset AirPassengers and a dataset named chol, stored into a .txt file and available for download.

Before you can start using chol in your histograms, you can best read in the text file with the help of the read.table() function:

2. Familiarize Yourself With The Hist() Function

You can simply make a histogram by using the hist() function, which computes a histogram of the given data values. You put the name of your dataset in between the parentheses of this function, like this:


Which results in the following histogram: 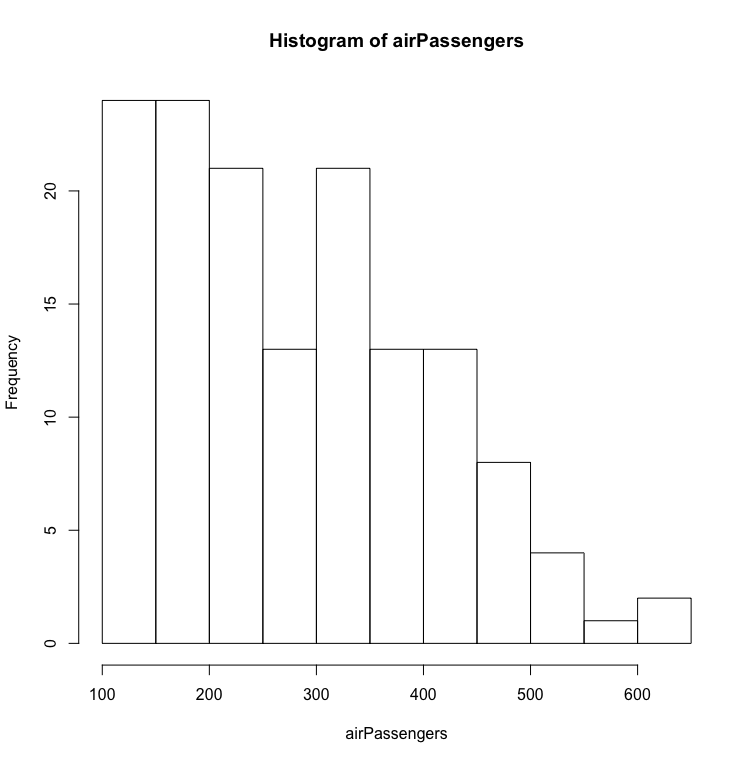 However, if you want to select only a specific column of a data frame, chol for example, to make a histogram, you will have to use the hist() function with the dataset name in combination with the $ sign, followed by the column name:


Note that the chol data has already been loaded in for you! 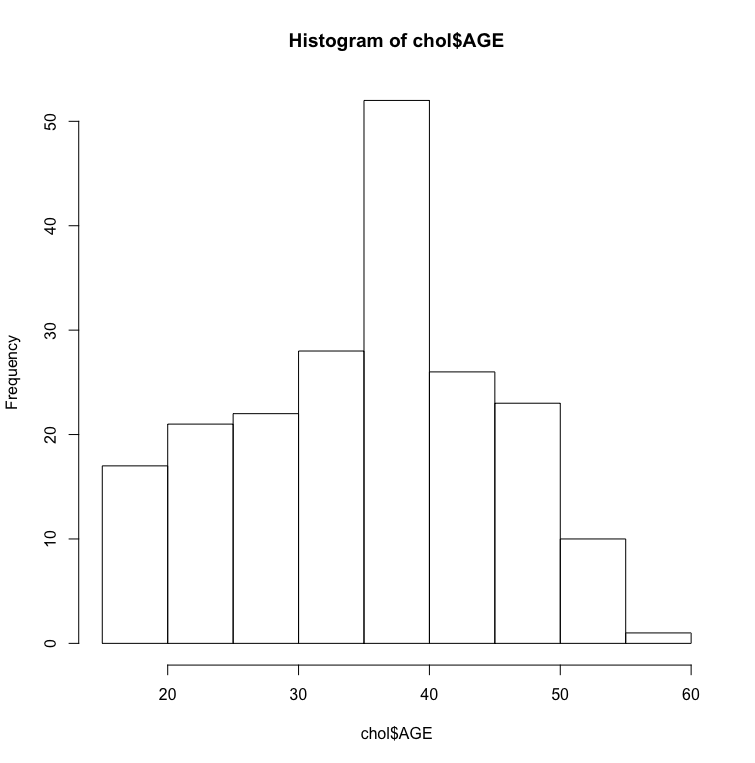 3. Take The hist() Function Up A Notch

The histograms of the previous section look a bit dull, don’t they?

The default visualizations usually do not contribute much to the understanding of your histograms. You, therefore, need to take one more step to reach a better and easier understanding of your histograms. Luckily, this is not too hard: R allows for several easy and fast ways to optimize the visualization of diagrams, while still using the hist() function.

In order to adapt your histogram, you merely need to add more arguments to the hist() function, just like this:


This code computes a histogram of the data values from the dataset AirPassengers, gives it “Histogram for Air Passengers” as title, labels the x-axis as “Passengers”, gives a blue border and a green color to the bins, while limiting the x-axis from 100 to 700, rotating the values printed on the y-axis by 1 and changing the bin-width to 5. 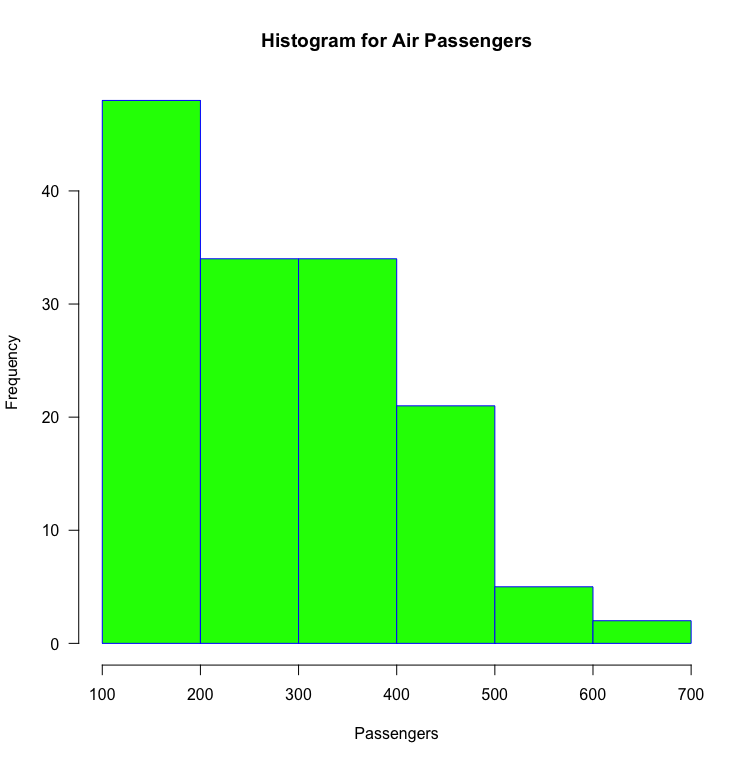 Do you feel slightly overwhelmed by this large string of code? No worries!

The following sections will break down the above code chunk into smaller pieces to see what each argument, such as main, col, …, does.

You can change the title of the histogram by adding main as an argument to hist() function. In this case, you make a histogram of the AirPassengers data set with the title “Histogram for Air Passengers”:


If you want to adjust the label of the x-axis, add xlab. Similarly, you can also use ylab to label the y-axis:


In the DataCamp Light chunk above, you have made a histogram of the AirPassengers data set with changed labels on the x-and y-axes.

If you want to change the colors of the default histogram, you merely add the arguments border or col. You can adjust, as the names itself kind of give away, the borders or the colors of your histogram. In the following code chunk, your histogram will have blue-bordered bins with green filling:


Tip: do not forget to put the colors and names in between "".

Change the range of the x and y values on the axes by adding xlim and ylim as arguments to the hist() function:

Note that the c() function is used to delimit the values on the axes when you are using xlim and ylim. It takes two values: the first one is the begin value; the second is the end value.

You can change the bin width by adding breaks as an argument, together with the number of breakpoints that you want to have:


The histogram that is the result of the line of code in the DataCamp Light chunk above has 5 breakpoints.

If you want to have more control over the breakpoints between bins, you can enrich the breaks argument by giving it a vector of breakpoints. You can do this by using the c() function:

However, the c() function can make your code very messy sometimes. That is why you can instead add seq(x, y, z). The values of x, y, and z are determined by yourself and represent, in order of appearance, the beginning number of the x-axis, the end number of the x-axis and the interval in which these numbers appear.

Note that you can also combine the two functions:


This histogram starts at 100 on the x-axis and at values 200 to 700, the bins are 150 wide. Take a look at the result of this piece of code by looking at the following image or by executing the DataCamp Light chunk! 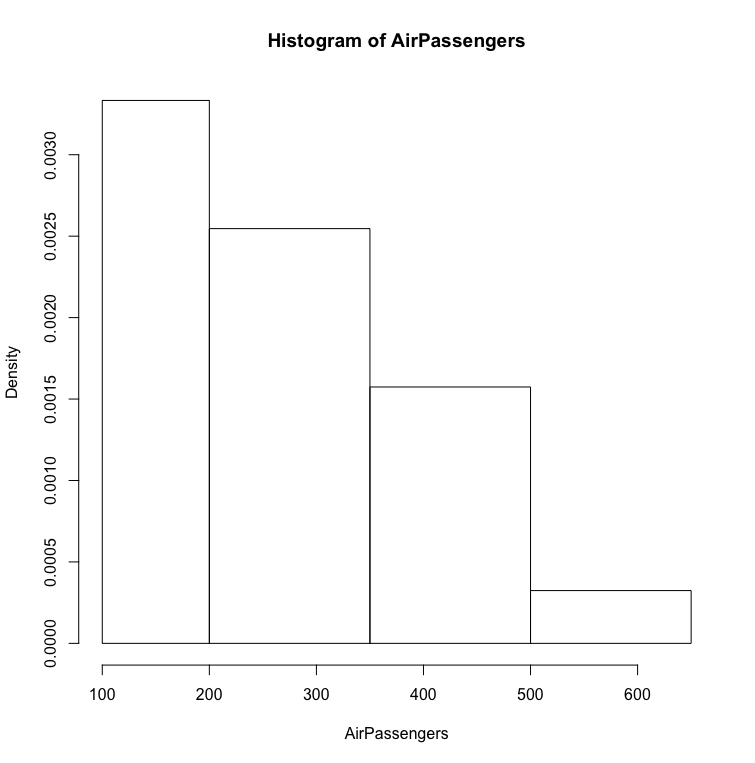 Tip: study the changes in the y-axis thoroughly when you experiment with the numbers used in the seq argument!

Note that the different width of the bars or bins might confuse people, and the most interesting parts of your data may find themselves to be not highlighted or even hidden when you apply this technique to your original histogram. So, just experiment with this and see what suits your purposes best!

The hist() function shows you by default the frequency of a certain bin on the y-axis. However, if you want to see how likely it is that an interval of values of the x-axis occurs, you will need a probability density rather than frequency. You thus want to ask for a histogram of proportions. You can change this by setting the freq argument to false or set the prob argument to TRUE:


After you’ve called the hist() function to create the above probability density plot, you can subsequently add a density curve to your dataset by using the lines() function:

Note that this function requires you to set the prob argument of the histogram to TRUE first!

This is the first of three posts on creating histograms with R. The next post covers the creation of histograms using ggplot2.