This week, the useR!2017 conference took place in Brussels. useR! is the annual international R User conference and is the main meeting of the R user and developer community.

More than 1,000 people from all over the world came to Brussels to discover the state of R. For those who didn’t make it, here are some of my personal conference insights and highlights:

YES You Can! (Contribute To The R Community)

With an inspiring and encouraging talk, Charlotte Wickham, Assistant Professor at Oregon State University and DataCamp instructor, pointed out that newbies can also contribute to the R community; By including her first pull requests on packages, code, … into the presentation, she showed that it’s normal and totally acceptable to start small and to work your way up in your contributions to the R community. 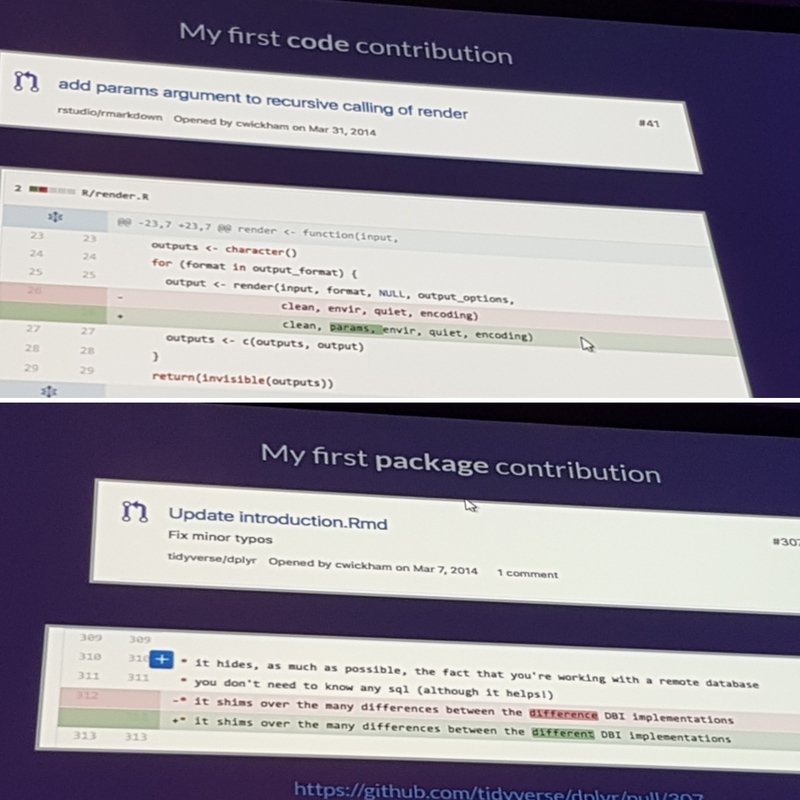 In the above pictures, you see that there are just minor additions to the code and the documentation; Whether it’s a missing argument or a grammatical error, you have got to start somewhere. I loved the above slides probably because I could heavily relate to them!

Maybe seemingly unrelated to the contributions that one can make to the R community, but definitely important to keep in mind if you need another motivator is the other beautiful slide that I saw in Julia Silge’s presentation of the useR2017! newbies session that gave credit to David Robinson, data scientist at Stack Overflow and course instructor at DataCamp: it talks about considering the value of your work. Here, the difference between anything that is still on your computer and anything that is out there in the world is highlighted:

Besides the fact that this is an incredibly good overview that anybody can and probably should take into account when putting time and effort in any given task, it’s an additional, good motivation is to contribute to the R community. :)

Both of the above pictures were taken from presentations given in the newbies' session, but the call for contributions didn’t stop at the first day of the conference - throughout the talks and tutorials, there were multiple moments in which the crowd was asked to collaborate and contribute.

I especially liked this in the talk on R Documentation which was given by Julia Silge, Spencer Graves, John C. Nash and DataCamp colleague Ludovic Vannoorenberghe and which ended with several breakout sessions in which possible directions were discussed to navigate the R Package Universe more easily.

The Road to Data Science

Another important reminder that I got while attending Julia Silge’s presentation at the newbies session was the fact that the road to data science is not straightforward for a lot of people; I’m pretty sure that this doesn’t come as a surprise to you, my readers, who have just gotten into data science or who have been learning data science for quite some time. However, in the midst of our journey, it could be that we lose track of this important small fact which makes the world of difference in our motivation. I was especially thankful to Julia for reminding the newbies of this. 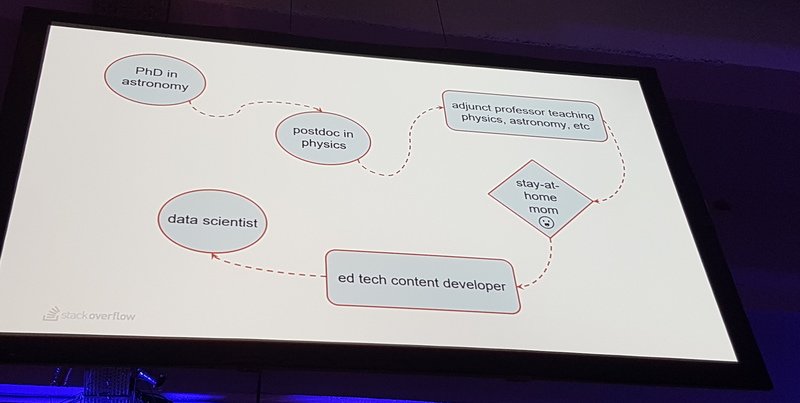 This was the first R conference that I attended, but as I was walking throughout the building, I heard a lot of people say that this was the first time that the talks were so diverse; Whether this is true or not I’ll leave in the middle, but a second look at the schedule indeed made me notice that there was definitely something for everyone - from data journalism to epidemiology, from sports betting to Minecraft.

For me, this conference was one big celebration of diversity and inclusivity.

Of course, the talks were one way in which you could see that, but also in the differences among the 1,000 attendees (with 54 nationalities!), the R Ladies who were prominently present throughout the conference and the R Ladies lunch which was held on the second full day of the conference, the child care and the breastfeeding area which were present in the conference building, the diversity scholarships, … 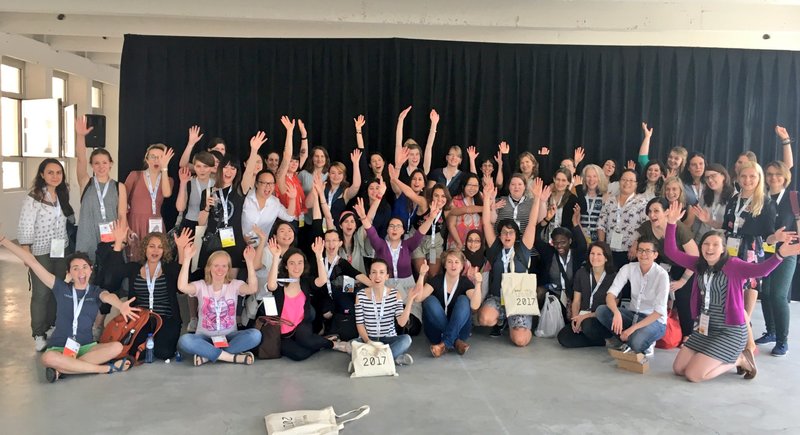 Maybe contrary to what I expected, there was a heavy focus at the conference on learning R; Besides the talk given by DataCamp’s CEO Jonathan Cornelissen, which dealt with the future of DataCamp. More concretely, Jonathan talked about the current landscape of online data science education and the shortcomings of interactive courses at this point (fluency and knowledge retention and open-ended projects), which led him to make some exciting announcements: for those who didn’t know yet, Jonathan introduced the daily practice mode, which allows users to practice their data skills every day. Read more about that here. Next, he also indicated that DataCamp is working on a mobile app and that projects will be added to the platform soon! 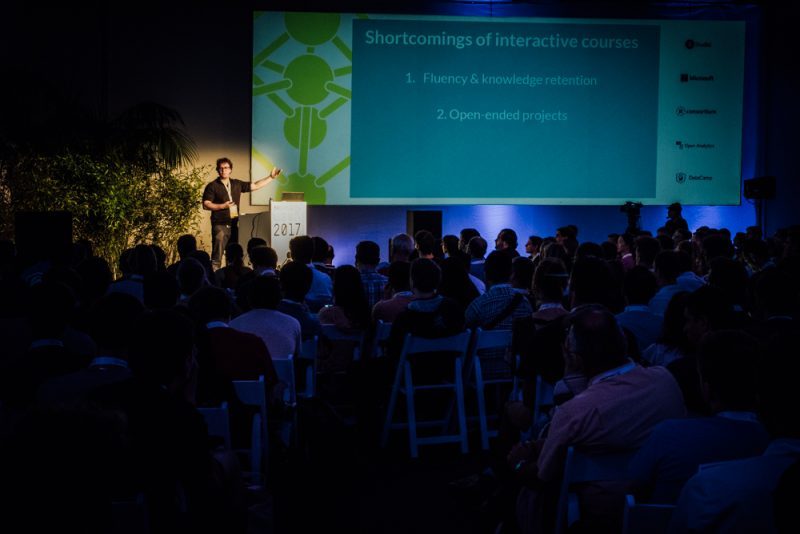 Besides this incredible news, there was also Mine Çetinkaya-Rundel’s keynote talk “Teaching Data Science to New UseRs”. This talk tried to answer the questions “How can we effectively and efficiently teach statistical thinking and computation to students with little to not background” and “How can we equip them with the skills and tools for reasoning with various types of data and leave them with wanting to learn more”. The main highlights of this talk were reproducibility, version control, the importance of interactive tools such as DataCamp to ease the learning curve, and, lastly, teaching the tidyverse to R beginners.

This last topic didn’t come as much of a surprise after the publication of David Robinson’s blog post, “Teach the tidyverse to beginners”.

Also here, the celebration of inclusivity wasn’t far away: David Smith’s talk on “R And Minecraft” dealt with R education, yet slightly in a different way - this talk was specifically oriented to teaching R to children with the help of the miner package, which allows children to interact with the Minecraft world with the help of simple R commands. This way, they can learn how to use R with the help of a companion book.

At first sight, this talk reminded me of “YaRrr! The Pirate’s Guide to R”, which is interesting if you’re thinking of teaching R to young adults or just learning R by yourself in a pirate context; It’s a different incentive, but it’s good to see that also the future of R users is being secured :)

And with this reference to Robinson’s blog post, which was sparked conversations in coffee and lunch breaks, the tidyverse was heavily present in the useR!2017 talks:


Besides these talks, which directly relate to the tidyverse, there also

A big thank you to the team behind useR!2017 and the speakers for organizing and participating in this incredible event!

Of course, there were many more talks, tutorials, and keynotes; There were more than 200 throughout the whole conference! What were your most important takeaways or highlights from this year’s useR!2017 conference? Let me know in the comments below!

PS. Didn’t get the chance to go to this year’s useR! conference? Maybe you can go to the useR!2018 conference in Brisbane!